We address functional tripodal molecules on surfaces as to control and monitor their state. We therefore developed various novel experimental methodologies, which allow the controllable positioning, characterization, addressing and switching of single molecular functional units.

One example is a single molecule switch based on electrostatic forces: We studied a spirobifluorene variant (collaboration M. Mayor) with a well-defined spatial arrangement of the head group. The dipole of this cyano group allows to exert forces on the molecule by application of electric fields. In this way, it is possible to form and to break the contact between STM tip and molecule (left figure). Firstly, this makes the system an electric-field controlled bi-stable switch (right figure). Secondly, the application of intermediate electric fields allows thermally induced transitions. Via Boltzman law, the population of the two conductance states is linked to the energy difference between them. We measured the energy difference as function of the distance between tip and sample and thus obtained the force that is needed to pull apart the junction.

While macroscopic motors react to a directed driving force with a directed motion, thermal energy washes over state population in any machines at the nanoscale resulting in brownian motion. Besides the astonishing variety of biological molecular machines, artificial molecular motors are still rare.

We prepared well ordered self-assembled layers of tetraphenylmethane derivatives of variable length comprising three acetyl-protected sulfur groups (collaboration M. Mayor). Using the tip of an STM, the acetyl group that sticks out of the molecular film can be removed by application of high voltage. This chemical modification works in a controlled way and the chemically modified molecule can easily be distinguished from the original ones. This allows one to engrave information on the nansocale with high temperature stability.

Light emission from the STM junction

The possibility to convert an electric current into light with the help of organic molecules is highly attractive from a scientific point of view as well as with regard to its application as a light source. While organic light emitting diodes (OLEDs) have been used in television screens, monitors and smart-phone displays, low power conversion efficiencies still prevent application on the large scale. In this field, the development of technological applications has experienced an enormous development, but still many issues on the molecular scale are only rudimentarily understood. We want to contribute to the fundamental understanding of this process on the level of single molecules adsorbed on well defined singles crystal surfaces.

Therefore, we built a low temperature STM with optical access. The light emitted from the tunneling junction is coupled out by a microscopic parabolic mirror (collaboration M. Wegener) onto a fibre which directly leads to a grating spectrometer. A He cryostat with Joule-Thomson stage allows to keep the temperature of the STM at 1.5 K. The long holding time of several days will allow extensive experiments without interruption which are necessary especially for combined measurements of electronic and optical properties on individual molecules with submolecular precision. First test measurements of the plasmonic light emission from a gold-gold junction show promising high photon yields. 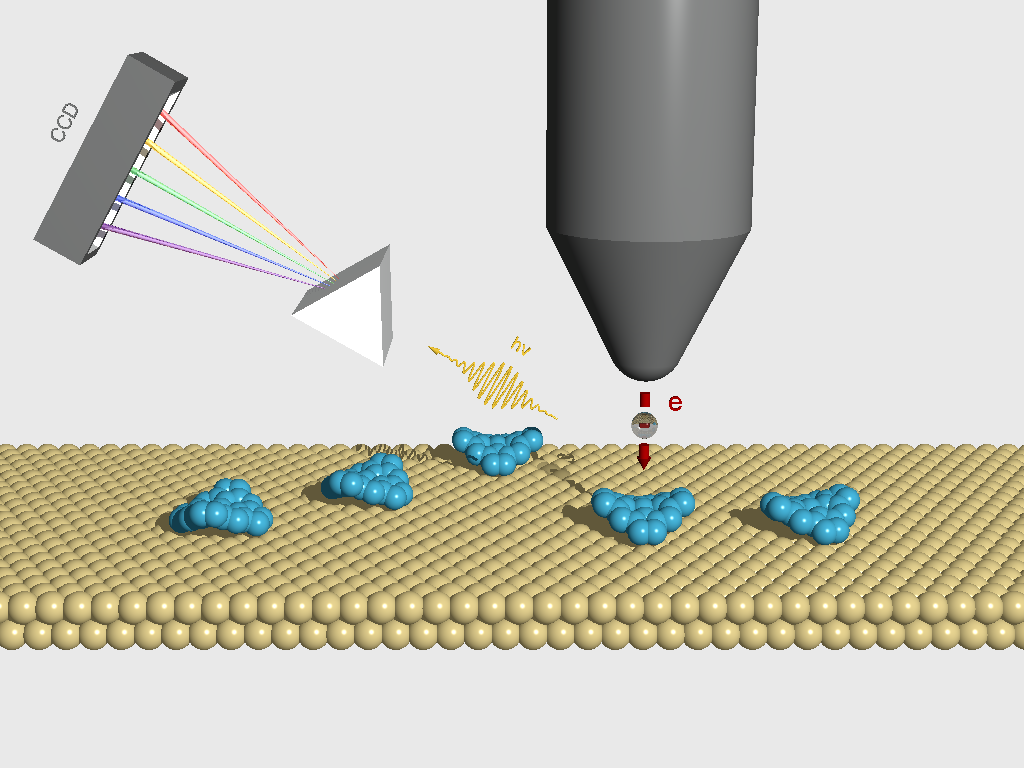 STM offers a bunch of experimental approaches to single molecules: firstly, it allows imaging of the sample with sub-molecular resolution and thus to study the individual molecule’s geometrical conformation. Secondly, scanning tunneling spectroscopy (STS) probes the electronic density of states of the sample, thus allows to determine HOMO and LUMO of a molecule. The precise distance control of the STM tip allows to directly contact molecules on a surface in order to measure their electronic properties. Future molecular devices are still imagined to be contacted by metallic electrodes, that is why hybridization of the molecular orbitals with metallic leads is a key issue. For example, the hybridization of the molecular orbitals with the electronic density of the leads may shift the energies of the HOMO and LUMO states and the gap and lead to a broadening of the states. This information is directly accessible by STS with single molecule resolution. We aim to extend these STM measurement techniques to the optical properties. We want to use the hot electrons in the STM to excite molecular electronic states which in turn may decay by emitting light. Using STS and STM induced lightemission spectroscopy, we will address fundamental aspects like the interpretation of light-emission spectra from the STM junction with regard to the measured HOMO-LUMO gap (collaboration L. de Cola, M. Mayor).

These topics are part of the Research Areas Quantum Transport and Correlations and Molecular Electronics.