Perspectives For Quantum Electronics on the Atomic-Scale

Controlling the electronic conductivity on the quantum level will impact the development of future nanoscale electronic circuits with ultralow power consumption. Here we report about the invention of the single-atom transistor, a device which allows one to open and close an electronic circuit by the controlled and reproducible repositioning of one single atom. It opens intriguing perspectives for the emerging fields of quantum electronics and logics on the atomic scale.

Fascinating physical properties and technological perspectives have motivated investigation of atomic-scale metallic point contacts in recent years [1-10]. The quantum nature of the electron is directly observable in a size range where the width of the contacts is comparable to the Fermi wavelength of the electrons, and conductance is quantized in multiples of 2e2/h for ballistic transport through ideal junctions [2]. In metallic point contacts, which have been fabricated by mechanically controlled deformation of thin metallic wires [2-4] and electrochemical fabrication techniques [1,5-7], the conductance depends on the chemical valence [2,3]. Two-terminal conductance-switching devices based on quantum point contacts were developed both with an STM-like setup [8] and with electrochemical methods [9]. In our new approach, a three-terminal, gate-controlled atomic quantum switch was fabricated by electrochemical deposition of silver between two nanoscale gold electrodes (see Fig. 1) [1,6]. A comparison of the experimental data with theoretical calculations indicates perfect atomic order within the contact area without volume or surface defects [10].

FIG.1: Schematic of the single-atom transistor: the atomic switch is entirely controlled by an independent third gate electrode, allowing to open and close a metallic contact between the source and drain electrodes by the gate-voltage-controlled relocation of one single silver atom.

We control individual atoms in the quantum point contact by a voltage applied to an independent gate electrode, which allows a reproducible switching of the contact between a quantized conducting "on-state" and an insulating "off-state" without any mechanical movement of an electrode (see Fig. 2). To fabricate the initial atomic-scale contact we deposit silver within a narrow gap between two macroscopic gold electrodes (gap width: typically 50 nm) by applying an electrochemical potential of 10-40 mV to a gate electrode [7]. The gold electrodes are covered with an insulating polymer coating except for the immediate contact area, and serve as electrochemical working electrodes. They correspond to the "source" and "drain" electrodes of the atomic-scale transistor. Two silver wires serve as counter and quasi-reference electrodes. The potentials of the working electrodes with respect to the quasi-reference and counter electrodes are set by a computer-controlled bipotentiostat (see Fig.3). All experiments are performed at room temperature, the electrolyte being kept in ambient air. For conductance measurements, an additional voltage in the millivolt range is applied between the two gold electrodes. To fabricate the atomic transistor, silver is deposited on each of the two working electrodes, until finally two silver crystals meet, forming an atomic scale contact which is bridging the gap. 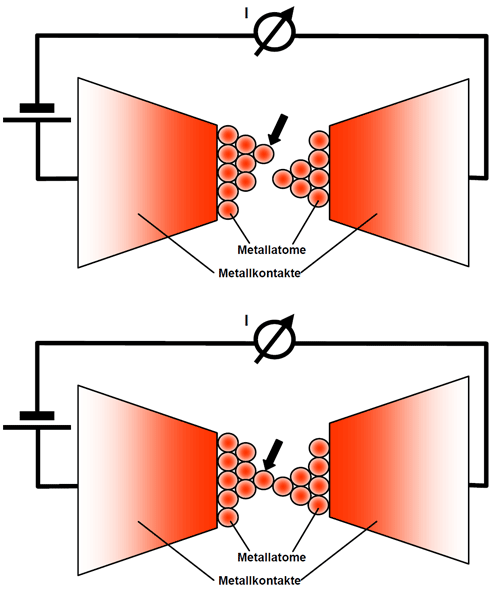 FIG. 2: Schematic of the switching process: A metal atom (see arrow) is switched between a quantized conducting "on-state" (lower graph) and an insulating "off-state" (upper graph). 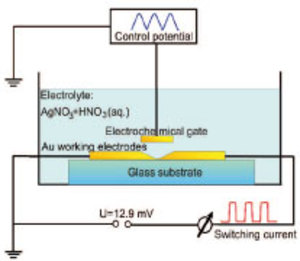 FIG. 3: The experimental setup. Within a narrow gap between two gold electrodes on a glass substrate, a silver point contact is deposited electrochemically. By a procedure involving repeated computer-controlled electrochemical cycling, a bistable atomic scale quantum conductance switch is fabricated.

Controlling the junction at the single-atom level

Figure 4 shows a sequence of reproducible switching events between an insulation "off-state" and a quantized conducting "on-state" (at 1 G0), where the quantum conductance (red curves) of the switch is controlled by the gate potential (blue curves), as commonly observed in transistors. As calculations have shown [10], for atomic-scale silver contacts a quantized conducting "on-state" of 1 G0 corresponds to a single-atom contact. 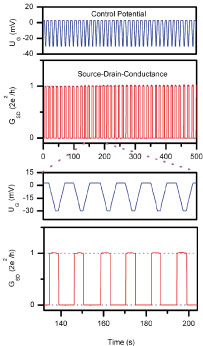 FIG. 4: Switching an electrical current by gatecontrolled atomic movement: Experimental realization of reproducible electrical switching with a single silver atom point contact between an "on-state" at 1 G0 (1 G0 = 2e2/h) and a non-conducting "off-state". The source-drain conductance (GSD) of the atomic switch (red curves) is directly controlled by the gate potential (UG) (blue curves).

When we set the gate potential to an intermediate "hold" level between the "on" and the "off" potentials, the currently existing state of the atomic switch remains stable, and no further switching takes place. This is demonstrated in Fig. 5 both for the "on-state" of the switch (left arrow) and for the "off-state" of the switch (right arrow). Thus, the switch can be reproducibly operated by the use of three values of the gate potential for "switching on", "switching off" and "hold". These results give clear evidence of a hysteresis when switching between the two quantized states of the switch. It can be explained by an energy barrier which has to be overcome when performing the structural changes within the contact when switching from the conducting to the non-conducting state of the switch and vice versa.

FIG. 5: Demonstration of quantum conductance switching between a nonconducting "off-state" and a preselected quantized " on-state" at 4 G0. A conductance level can be kept stable, if UG is kept at a "hold" level (see arrows). (cf. [1]).

The results indicate that switching occurs by a reversibly rearrangement of the contacting group of atoms between two different stable configurations with a potential barrier between them. For silver the observed quantum conductance levels appear to coincide with integer multiples of the conductance quantum [1,10].

The observed integer conductance levels of the switch are determined by the available bistable junction conformations, similar to the observation of preferential atomic configurations in metallic clusters corresponding to "magic numbers" [12]. By snapping into 'magic' bistable conformations, such energetically preferred junctions configurations are mechanically and thermally stable at room temperature, and they are reproducibly retained even during long sequences of switching cycles.

Such multi-level logics and storage devices on the atomic scale would be of great interest as they allow a more efficient data storage and processing with a smaller number of logical gates. By developing a modified procedure of fabrication, a multi-level atomic quantum transistor was obtained, allowing the gate-controlled switching between different conducting states.

Figure 6 demonstrates the operation of such a twolevel transistor: A controlled change of the gate potential UG leads to a controlled switching of the conductance of the quantum point contact between two different quantized conducting states, exhibiting conductance levels of 1 G0 and 3 G0, respectively. Sharp transitions are observed between the two levels. No intermediate steps or staircase-like structures in conductance are observed in the diagram. The transitions are instantaneous within the time resolution of the diagram of Fig. 6 (50 ms). 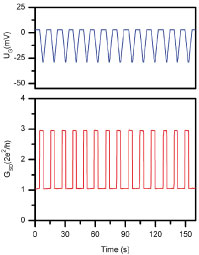 FIG. 6: Example of a twolevel quantum transistor switching between the conductance levels of 1 G0 and 3 G0, respectively. The source-drain conductance (GSD) of the atomic switch (red curves) is directly controlled by the gate potential (UG) (blue curves).

The development of the single-atom transistor represents a first demonstration of the functionality of a transistor on the atomic scale. This is of great interest, as there were many previous demonstrations of passive devices such as atomic-scale and molecular resistors. However, there was a lack of an actively switching device such as a transistor on the atomic scale. The atomic transistor as an actively controllable device, which reproducibly operates at room temperature, is filling this gap.

Such devices provide a number of advantages: They possess extremely nonlinear current-voltage characteristics, desirable in many applications, and they can be manufactured using conventional, abundant, inexpensive and non-toxic materials. At the same time, the devices open perspectives for electronic switching at ultrafast frequencies: although the switching time in our current investigations is limited by the response time of the electronic measuring setup (3-5 microseconds), the intrinsic operation time is expected to be limited by the atomicscale rearrangement within the junction (picoseconds), opening perspectives for ultra-high frequency operation. Because the switching process is achieved with very small gate potentials in the millivolt range, the power consumption of such devices is by orders of magnitude lower than that of conventional semiconductor-based electronics.

Although the development of the single-atom transistor just marks the beginning of actively controlled electronics on the atomic scale, it opens fascinating perspectives for quantum electronics and logics based on individual atoms. The development of a first, simple integrated circuit [1,14] and a multilevel quantum transistor [13] are first encouraging steps in this direction.

Dr. Christian Obermair and Dr. Fang-Qing Xie are Senior Scientists in the same group, their research focusing on quantum transport and atomic-scale electronics. Dr. Obermair is Administrative Director of the above research network. For further information see www.schimmel-group.de.

Correspondence should be adressed to Th. Schimmel (E-Mail: thomas.schimmel∂kit.edu )