The Trapped Ione Electron Diffraction (TIED) experiment is a hybrid of ion-trap mass spectrometry and the electron diffraction technique. It allows experimental structure determination of cluster ions in gas phase. A high energy electron beam is scattered at a size-selected cluster ion ensemble. A structure assignment is achieved by comparison of experimental and simulated diffraction function from a candidate structure. Candidate structures are obtained from quantum chemical calculations performed either in our group or in collaboration with external theory groups. 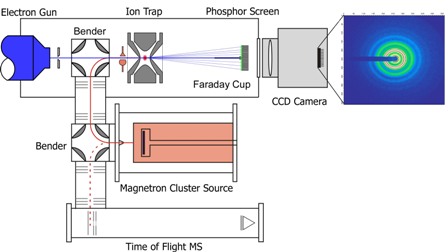 We study the structural development of metal clusters from the dimer to the bulk. Metal clusters show strongly size- dependent physical and chemical properties. Gold clusters, for example, have size-dependent chemical reactivities and may even be catalytically active (e.g. CO-oxidation at low temperatures) while bulk gold is largely inert. As properties and structure strongly correlate, it is crucial to understand the development of structure with size for a better understanding and utilization of these clusters. For systems larger than 20 atoms the currently available computational performance still limits the quality of structural predictions and experimental structure determinations are essential.

The structures of platinum cluster anions have been investigated by trapped ion electron diffraction. Structures were assigned by comparing experimental and simulated scattering functions using candidate structures obtained by density functional theory computations, including spin–orbit coupling. We find a structural evolution from planar structures (Pt6-, Pt7-) and amorphous-like structures (Pt7--Pt9-) to structures based on distorted tetrahedra (Pt9--Pt11-). Finally, Pt12- and Pt13- are based on hcp fragments. While the structural parameters are well described by density functional theory computations for all clusters studied, the predicted lowest energy structure is found in the experiment only for Pt6-. For larger clusters, higher energy isomers are necessary to obtain a fit to the scattering data. Journal of Physical Chemistry A 2022, 126, 3502

We have studied the structural evolution of tantalum cluster anions Tan–, 6 ≤ n ≤ 13  We find octahedral structures for Ta6– and Ta8– as well as structures based on the pentagonal bipyramid (Ta7– and Ta9–). Ta10––Ta12– are defective icosahedral structures and Ta13– is a distorted icosahedron. For most clusters, we find a good agreement between the theoretically predicted ground-state structures, especially those determined by the 2C method and the TIED results. Phys. Chem. A 125, 3135-3145 (2021) 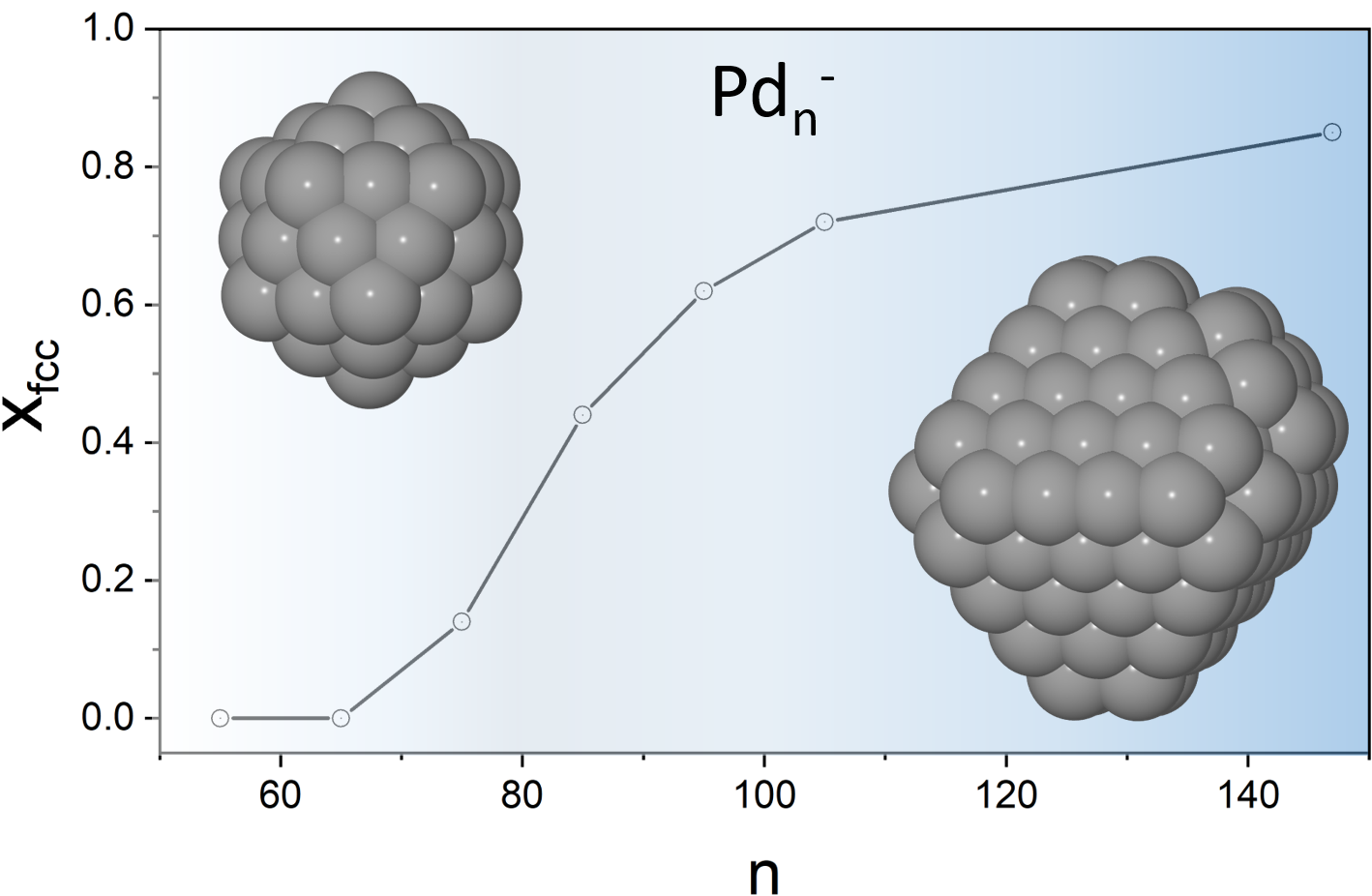 We present a study of the structural evolution of palladium cluster anions in a size range from 55-147 atoms using a combination of trapped ion electron diffraction and density functional theory computations. We show that Pdn- clusters (n = 55, 65, 75, 85, 95, 105 and 147) change from an icosahedral motif at Pd55- to the bulk fcc motif at Pd147-.This size dependent structure transition is probed experimentally at a temperature of 95 K and characterized by a continuously increasing fraction of fcc isomers over the considered size range showing a cross over to the fcc motif at n ~ 90. J. Phys. Chem. A 123, 10940 (2019)

The effect of hydrogenation on the structure of Ru19- has been studied using a combination of trapped ion electron diffraction and density functional computations. The bare Ru19-cluster has a closed-shell octahedral geometry, hydrogenation of the cluster changes the structure type of the ruthenium core toward an icosahedral motif. The experiments show a gradual structural transition depending on the number of adsorbed hydrogen atoms. Density functional theory computations reveal the driving force behind this process to be the larger hydrogen adsorption energies for the bi-icosahedral structure and predict a corresponding structural rearrangement at around 20 adsorbed hydrogen atoms, which is consistent with the experimental findings.  J. Phys. Chem. C, 121, 10645 (2017)

structural motif is found for ruthenium clusters. Electron-diffraction measurements combined with density functional theory calculations show that free medium-sized ruthenium clusters form close-packed structures based on octahedral geometries. For Ru19− and Ru44− closed-shell octahedra are formed. In the case of Ru28−, a double octahedron is obtained. For Ru38−, instead of a truncated octahedron we obtain evidence for lower symmetry structures containing a reentrant surface, similar to catalytically active nanoparticle B5 surface sites. ChemPhysChem 15, 862 (2014).

Correlation of cluster and bulk structure 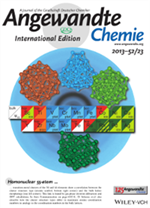 The structures of bismuth cluster cations in the range between 4 and 14 atoms have been assigned by a combination of gas phase ion mobility, TIED and DFT calculations. Above 8 atoms the Bismuth clusters adopt prolate structures. These open structures are more like those seen for clusters of semiconducting-in-bulk elements (such as silicon) rather than resembling the compact structures typical for clusters of metallic-in-bulk elements. An accurate description requires taking spin-orbit coupling into account. For n = 11 we infer that low energy isomers can have fragmentation thresholds comparable to their structural interconversion barriers. This gives rise to experimental isomer distributions which are dependent on formation and annealing histories. More see J. Chem. Phys. 136, 154309 (2012) 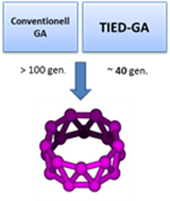 The computer time for the search of the global minimum energy structure of a cluster increases exponential with time. Tools for a systematic approach exists, especially genetic algorithms have proven useful. By including experimental electron scattering data (in terms of a weighted profile factor) in addition to the energy of a cluster structure as an additional criterion for evaluating trial structures leads to accelerated convergence behavior and increased robustness. More: Chem. Phys. Lett. 532, 119 (2012)

The structures of medium-sized Tin clusters are based on only three repeatedly appearing subunit clusters, the Sn7 pentagonal bipyramid, the Sn9 tricapped trigonal prism and the Sn10 bicapped tetragonal antiprism. These subclusters are either edge or face connected (Sn15-, Sn16-) or combined to dimers (Sn18-, Sn20-) to form the clusters. In larger clusters combined subclusters are realized as in the case of Sn25-. It comprises a Sn10 connected to a Sn15 subunit which closely resembles the ground state of Sn15-. Finally, at the largest cluster size studied, first indications of the appearance of the diamond bulk structure were observed. More: J. Chem. Phys. 2010, 132, 211102 and Phys. Chem. Chem. Phys. 2012, 14, 234

The structures of Aun- (n=11-20) have been studied. Gold clusters in this size range show a large structural variability. For Au11- best agreement between experimental data and theoretical model structure was found for a planar structure. The TIED results indicate a 2D to 3D transition at a size of 12 gold atoms. Here a mixture of essentially iso-energetic 2D and 3D structures was found. Au13- to Au15- are flat 3D structures, where a new isomer hitherto unknown, was found for Au14-. Hollow cage structures were found for Au16-, Au17- and Au18-. Au19- and Au20- are tetrahedral structures. More: Phys. Rev. A 2008, 77, 053202 and Phys. Chem. Chem. Phys. 2009, 11, 4344

Some gold cluster ions have cage structures which can be filled with a dopant atom. Doping with magnetic atoms Fe and Co was possible without destroying the gold cage leading to endohedral structures like Fe@Au16-. Currently we extend the doping experiments to early transition metal atoms to study a structure forming influence of the dopant atom. Moreover measurements with larger number of dopant atoms are planned to explore the structures of alloyed gold clusters. More: Phys. Rev. B 2009, 79, 033413

The structures of mass-selected silver cluster cations Ag19+- Ag79+ have been probed at a temperature of 100 K. For the cluster sizes studied the resulting experimental data are invariably best described by structures based on the icosahedral motif, indicating an icosahedral growth sequence for silver clusters in this size range. Nano Lett. 2005, 5, 1972 and J. Chem. Phys. 2006, 124, 244308