Trapped ion Laser Induced Fluorescence (TLIF) is an experiment for luminescence spectroscopy of isolated trapped ions in the gas phase. It combines the advantages of mass spectrometric analysis with laser induced luminescence characterization of the species studied. Ions are electro-sprayed using a nano electrospray ionization source (nano-ESI), trapped, mass selected and thermalized down to liquid nitrogen temperature in the center of a Paul trap. 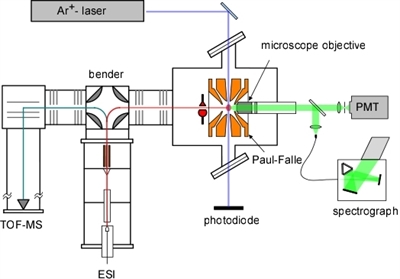 Trapped ions are excited by continuous wave lasers (argon ion-, diode- or dye-laser) crossing the ion cloud. Luminescence collected by an inverted microscope is either integrated using a photomultiplier or dispersed using a spectrograph coupled to a CCD camera. TLIF allows determination of intrinsic properties of organic and inorganic emitters. It provides information on energy levels of the emitting states, on the time constants of radiative and non-radiative processes (currently over the 10-6 to 102 s range), as well as on the influence of solvent interactions on the processes involved. TLIF offers unique capabilities such as the study of different charge and aggegation states as well as stoichiometries not available in condensed phase. It also allows performing reactivity studies between excited states and gas-phase species such as oxygen. 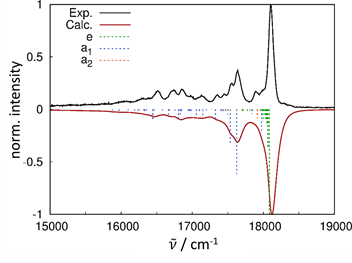 Gas-phase laser-induced photoluminescence of cationic gadolinium and lutetium complexes involving two 9-oxophenalen-1-one ligands has been determined at 83 K. Comparison to DFT based harmonic Franck–Condon computations show, that the main vibrational contributions are well described, whereas the absolute transition energies are off by several thousand wavenumbers. This discrepancy is found to remain at higher computational levels, the relative energy of the Gd(III) and Lu(III) emission bands is only reproduced at the coupled-cluster singles and doubles level and beyond. Journal of Physical Chemistry A, 2018, 122, 2461

Correlation of structure, gas-phase photoluminescence and ion-mobility spectroscopy with DFT and ligand-field theory

The structural impact of coordinated alkali earth dications on the photoluminescence spectra was studied in a investigation of [Eu(PLN)4AE]+ with AE = Mg, Ca, and Sr, using TLIF, TIMS and DFT. In order to sort out the structural impact of the alkali earth dications on the photoluminescence spectra, the experimental data are compared to the predicted ligand-field splittings as well as to the collision cross-sections for different isomers of [Eu(PLN)4AE]+. Physical Chemistry Chemical Physics, 2017, 19, 6105 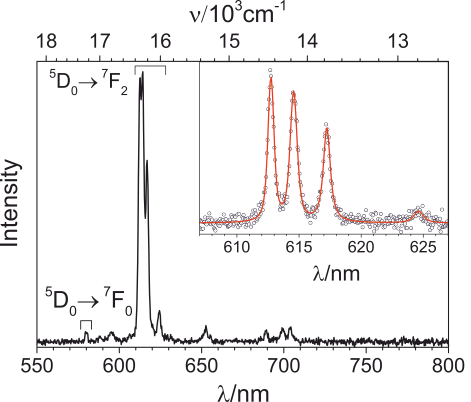 We report the intrinsic luminescence properties of nonanuclear europium(III) and gadolinium(III) 9-hydroxyphenalen-1-one (HPLN)−hydroxo complexes. Luminescence spectra of [Eu9(PLN)16(OH)10]+ ions reveal an europium-centered emission dominated by a 4-fold split Eu(III) hypersensitive transition. The corresponding Gd(III) complex shows a broad emission from a ligand based triplet state with an onset of about 1000 wavenumbers in excess of the europium emission. As supported by photoluminescence lifetime measurements for both complexes, we deduce an efficient europium sensitization via PLN-based triplet states. The luminescence spectra of the complexes are discussed in terms of a square antiprismatic europium/gadolinium core structure as suggested by density functional computations. J. Phys. Chem. Lett, 2014, 5, 1727 and Inorganic Chemistry, 2016, 55, 3316 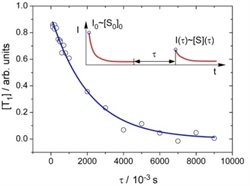 The gas phase triplet state lifetimes and dispersed fluorescence spectra of several types of rhodamine cations thermalized at 85 K have been investigated. The measured triplet lifetimes of rhodamine cations Rh6G+, Rh575+, RhB+, and Rh101+ are the order of seconds, several orders of magnitude longer than those typically observed for the same dyes in optical condensed phase measurements. Dispersed fluorescence emission spectra in the gas phase at 85 K have been measured and compared to density functional calculations. More see JPC A, 2010, 114, 5509-5514 and PCCP 2013, 15, 8162-8170 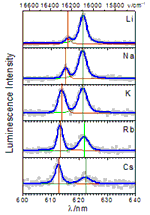 Gas phase dispersed photoluminescence spectra of europium (III) 9-hydroxylphenalen-1-one (HPLN) complexes cationized by alkali metals, [Eu(PLN)3M]+ with M=Li, Na, K, Rb, and Cs, have been studied. The mass selected alkali cation adducts display a split hypersensitive Eu3+ emission band. One of the two emission components shows a linear dependence on the radius of the alkali cation whereas the other component displays a quadratic dependence thereon. In addition, the relative intensities of both components invert in the same order. The experimental results are interpreted with the support of density functional calculations and Judd-Ofelt theory, yielding also structural information on the isolated [Eu(PLN)3M]+ chromophores. More see JPC A, 2013