In search of new concepts to build batteries with high energy densities, electrochemical cells based on metal fluorides may be promising.

We have demonstrated the first reversibly working battery cells based on fluoride shuttle. In secondary fluoride batteries, fluoride anion acts as charge transfer ion between a metal/ metal fluoride pair where it will react with metal or evolve from metal fluoride depending on the flow of current. The theoretical capacity can be several times higher than that of conventional Li ion batteries, depending on the combination of metal and metal fluoride (see also: A.M. Reddy and M. Fichtner, J. Mater. Chem. 21, 17059 (2011)). 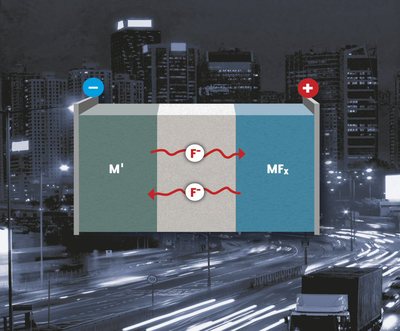 Sketch of the principle architecture of a Fluoride Ion Battery.

The Chloride Ion Battery (CIB) is a logical consequence of the development of the Fluoride Ion Battery.  Also here, singly charged negative ions shuttle between cathode and anode where metal chlorides are either formed or reduced to the metal depending on whether the battery is charged or discharged.  The group has demonstrated the proof-of-principle and built first cells of this kind. Ionic liquids have been used as elecrolytes at room temperature (see also X. Zhao, Sh. Ren, M. Bruns, and M. Fichtner, Chloride ion battery: a new member in the rechargeable battery family, J. Power Sources 245 (2014) 706-711; X. Zhao, Zh. Zhao-Karger, D. Wang, and M. Fichtner, Angew. Chemie Int. Ed. 52 (2013) 13621-13624) 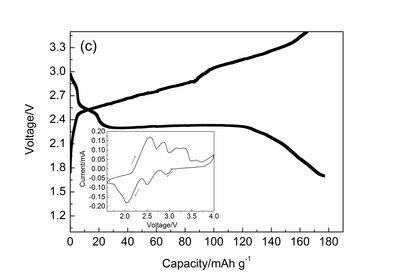 Discharge and charge curve of BiCl3/Li system in the electrolyte of 1 M [OMIM][Cl] at 298 K.

Mg as anode material has the potential advantage of a high theoretical volumetric capacity of 3832 mAh/cm3(Li: 2062 mAh/cm>3), its electrochemical potential is -2.37 V vs. NHE. Interestingly, Mg does not form dendrites when electrodeposited and can therefore be used in metallic form, thus avoiding inert host materials like in the Li/graphite system. Mg is environmentally benign, safe to handle and of low cost compared to lithium. A particular challenge is the development of an electrolyte for reversible Mg shuttle. We have developed a non-nucleophilic electrolyte which is synthesized from standard chemicals, shows a high stripping/plating efficiency and has an unprecedented electrochemical stability window of 3.9 V. The electrolyte is compatible with a sulfur cathode and it opens the door to the development and application of new high voltage cathodes for Mg batteries (see also Zh. Zhao-Karger, X. Zhao, O. Fuhr and M. Fichtner, RSC ADVANCES 3 (2013) 16330-16335). 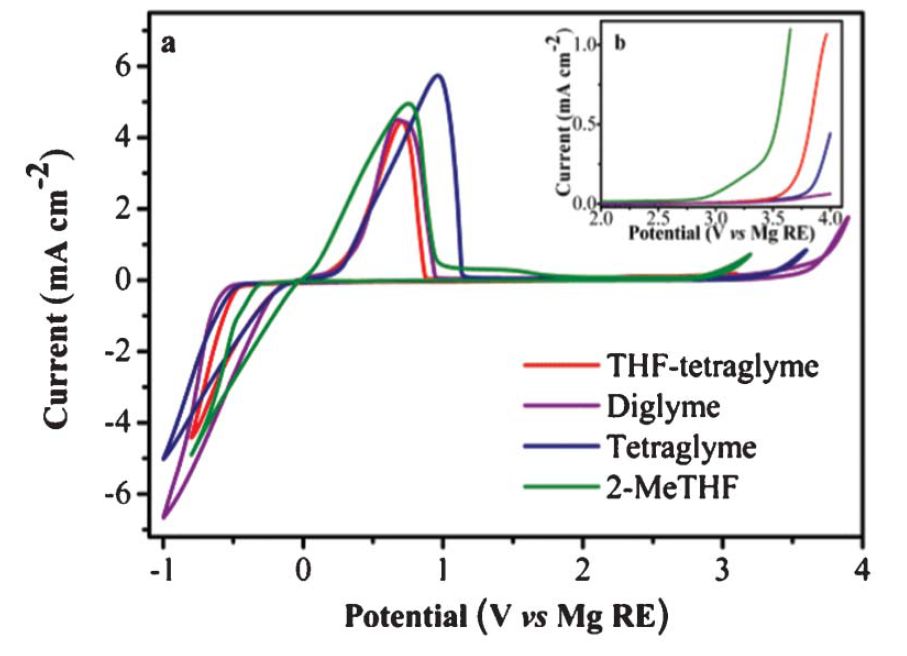 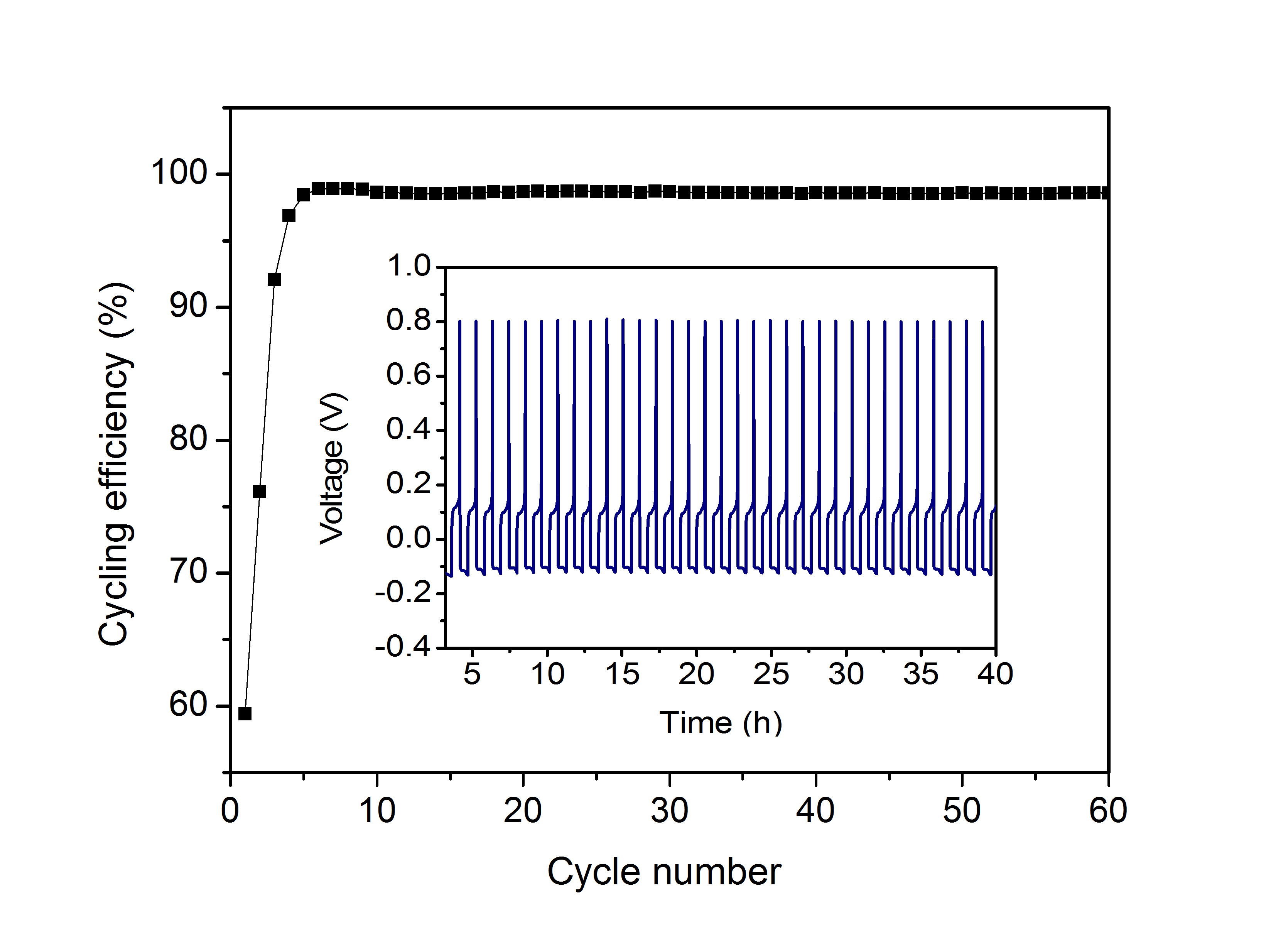 Left: Cyclic voltammograms of the Mg deposition/dissolution of base (HMDS)2Mg–2AlCl3 in different solvents at a scan rate of 25 mV/s. Inset shows a linear sweep voltammograms indicating the decomposition potential of the electrolyte at a scan rate of 5 mV/s; Pt with a surface area about 1 cm2 was used as working electrode and magnesium metal was used as reference at 25 °C. Right:The cycling efficiencies and the first 40 chronopotentiograms (inset) of Mg deposition and dissolution on Pt in the 0.35 M diglyme solution of (HMDS)2Mg–2AlCl3.

Using a sulfur/CMK-3 composite as cathode, Mg metal as anode and the designed electrolyte in tetraglyme or a binary solvent of glyme and PP14TFSI, the discharge performance and the cyclability of the batteries was considerably improved compared to the first report on Mg/S battery where an HMDS based electrolyte was used in THF solution. The electrochemical conversion of magnesium and sulfur via the formation of a series of intermediate polysulfide MgSx (2<x<8) has been verified by means of various analytical and electrochemical techniques.
Interestingly, the discharge occurs close to the theoretical voltage of 1.7 V with the new electrolyte.
(Zh. Zhao-Karger, X. Zhao, D. Wang, Th. Diemant, R.J. Behm, and M. Fichtner: Performance Improvement of Magnesium Sulfur Batteries with Modified Non-Nucleophilic Electrolytes. Advanced Energy Materials. Article first published online: 6 OCT 2014. DOI: 10.1002/aenm.201401155) 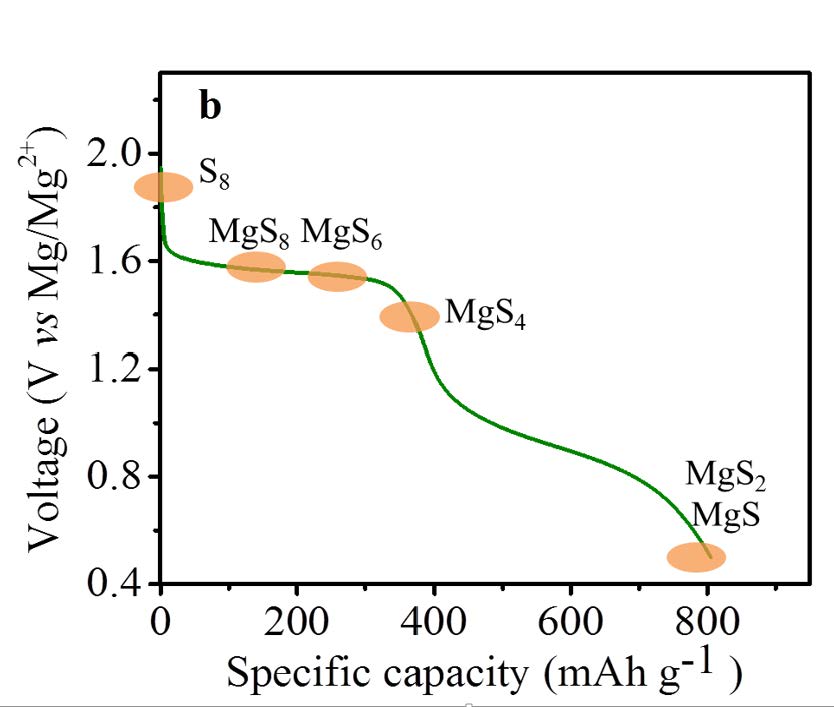 A major issue in Metal-Sulfur Batteries is the formation of polysulfide intermediates during the transition from neutral S8 to Li2S and Li2S2 during discharge. The longer polysulfides are soluble in the electrolyte, which leads to gradual dissolution of the cathode, to self-discharge and a multistep voltage profile, due to different subsequent reactions.
By extensive XPS studies of the subsurface region we have shown now that a simple, coconut based active carbon with ultramicropores (ca. 0.6 nm diameter) does not allow infiltration of the large S8 rings, nor does it allow formation of soluble polysulfides. Rather, one direct transition from smaller sulfur species to Li sulfide and -disulfide is observed. No polysulfides have been found in the electrolyte and there is only one voltage plateau (M. Helen, M. Anji Reddy, T. Diemant, U. Golla-Schindler, R. J. Behm, and M. Fichtner (2015) Sci.Reports) 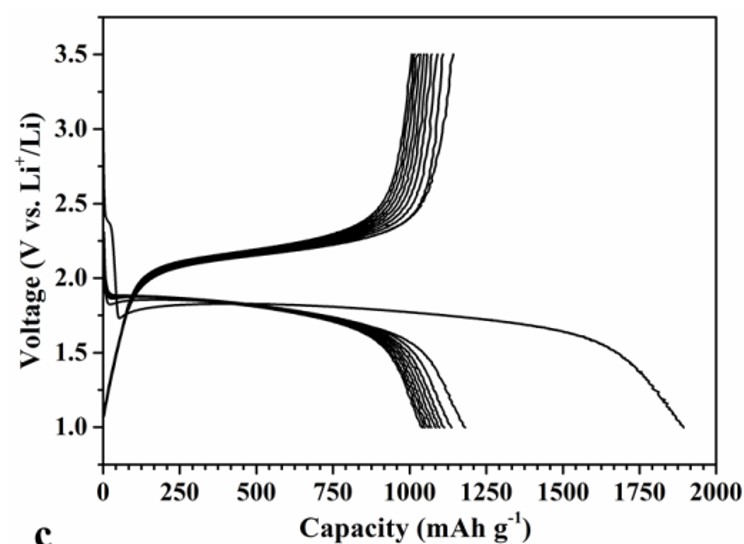 Nanocomposites based on transition metal compounds may serve as high energy cathode materials in case the solid state reaction between the nonmetal and Li can be made fully reversible on the microscale.

Li Rich FCC materials exhibit a new storage principle for lithium ions. These materials can store and reversibly exchange more than one lithium ion per formula unit by a mechanism which yields unprecedented packing densities and highest volumetric content of Li in a cathode (theoretical 7800 Wh/L). This is almost twice the performance of current commercial state-of-the-art materials and constitutes a 60% improvement compared to lithium sulfur technology. A proof-of-principle has been obtained recently making the enormous potential of this new material class apparent and suggesting first ideas regarding structural features and Li transport mechanisms. Our studies have shown that oxyfluorides with the general composition Li2MO2F (M = V, Cr) do not store lithium through a “classical” intercalation mechanisms but rather incorporate Li into their crystal structure, leading to unexpected and novel dynamics and properties (Disordered Lithium-Rich Oxyfluoride as Promising Intercalation Cathode for Lithium-Ion Batteries, R. Chen et al., Adv. Energy Mater. 5 (2015) 1401814; Disordered Rock-Salt Li2VxCr1-xO2F as High-performance Intercalation Cathodes for Enhanced Li+ Storage, S. Ren et al., Adv. Sci. 2 (2015) 1500128). Recently, a related proposal "LiRichFCC" was selected by the EU as one out 12 other succesful proposals from 822 submitted proposals in the "Future Emerging Technologies - OPEN" call of the EU. 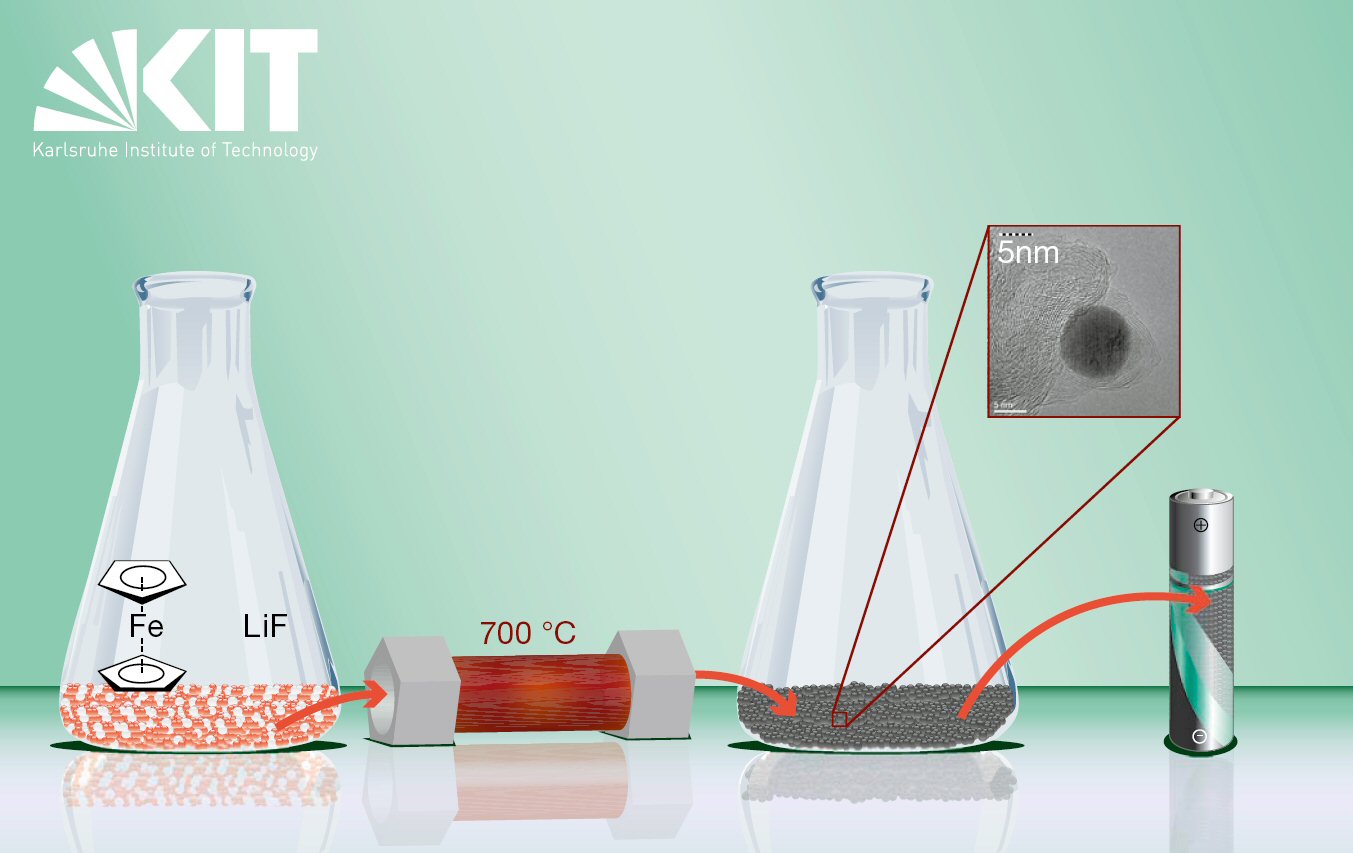 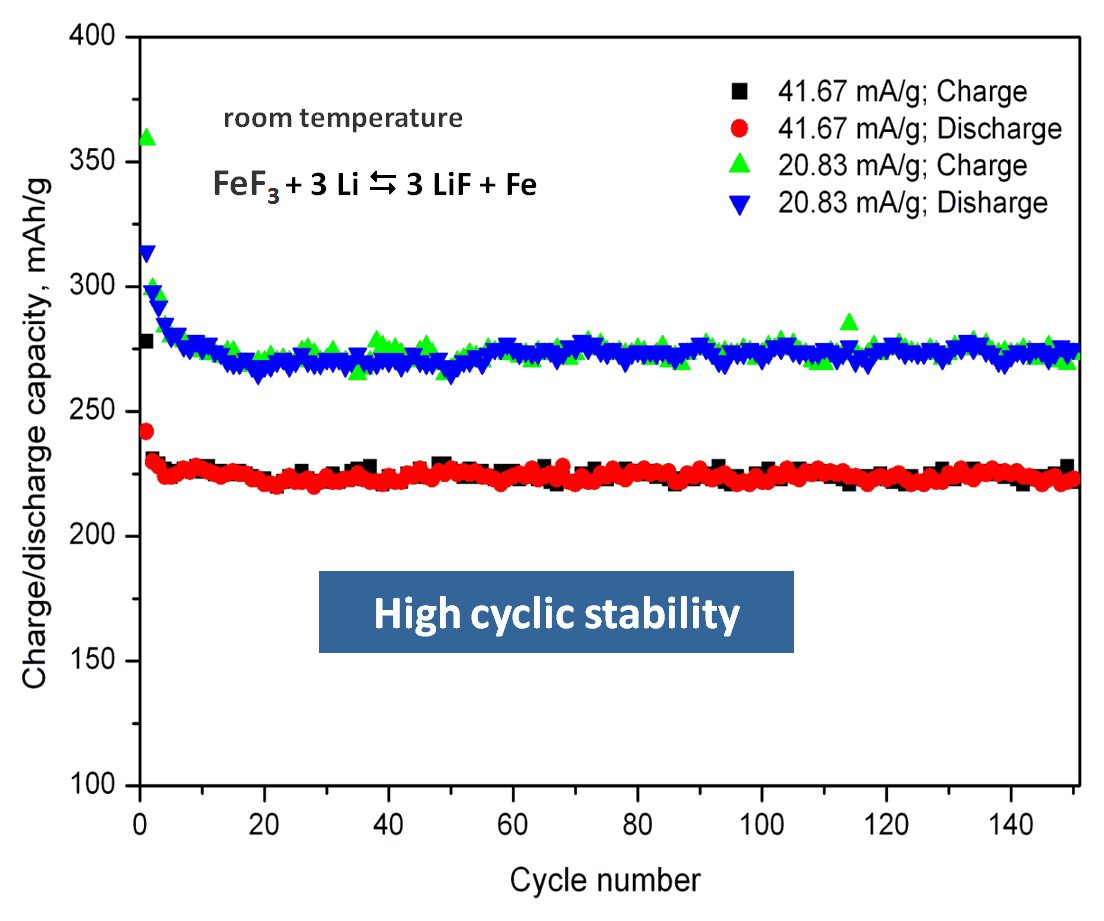 A novel single step Reactive Intercalation Process allows synthesis of carbon-FeF2 nanocomposites where the active material is clamped between sheetes of graphite. Graphite fluoride and iron carbonyl are used as a metal source. FeF2 nanoparticles form inside a matrix which initially acts as an F- donor and, at the same time, transforms from a non-conducting graphite derivative into an electrically well conducting graphitic matrix. The synthesis proceeds in one step and leaves no solid or liquid by-products so that the product can be used as electrode material in a battery cell without further purification or post-treatment, see M. Anji Reddy, B. Breitung, V.S.K. Chakravadhanula, C. Wall, M. Engel, C. Kübel, A.K. Powell, H. Hahn and M. Fichtner, ADV. ENERGY MATER. 3 (2013) 274 (Cover Article & Top 10 Article in 12/2012).

Scheme of the process and cyclic properties of product: 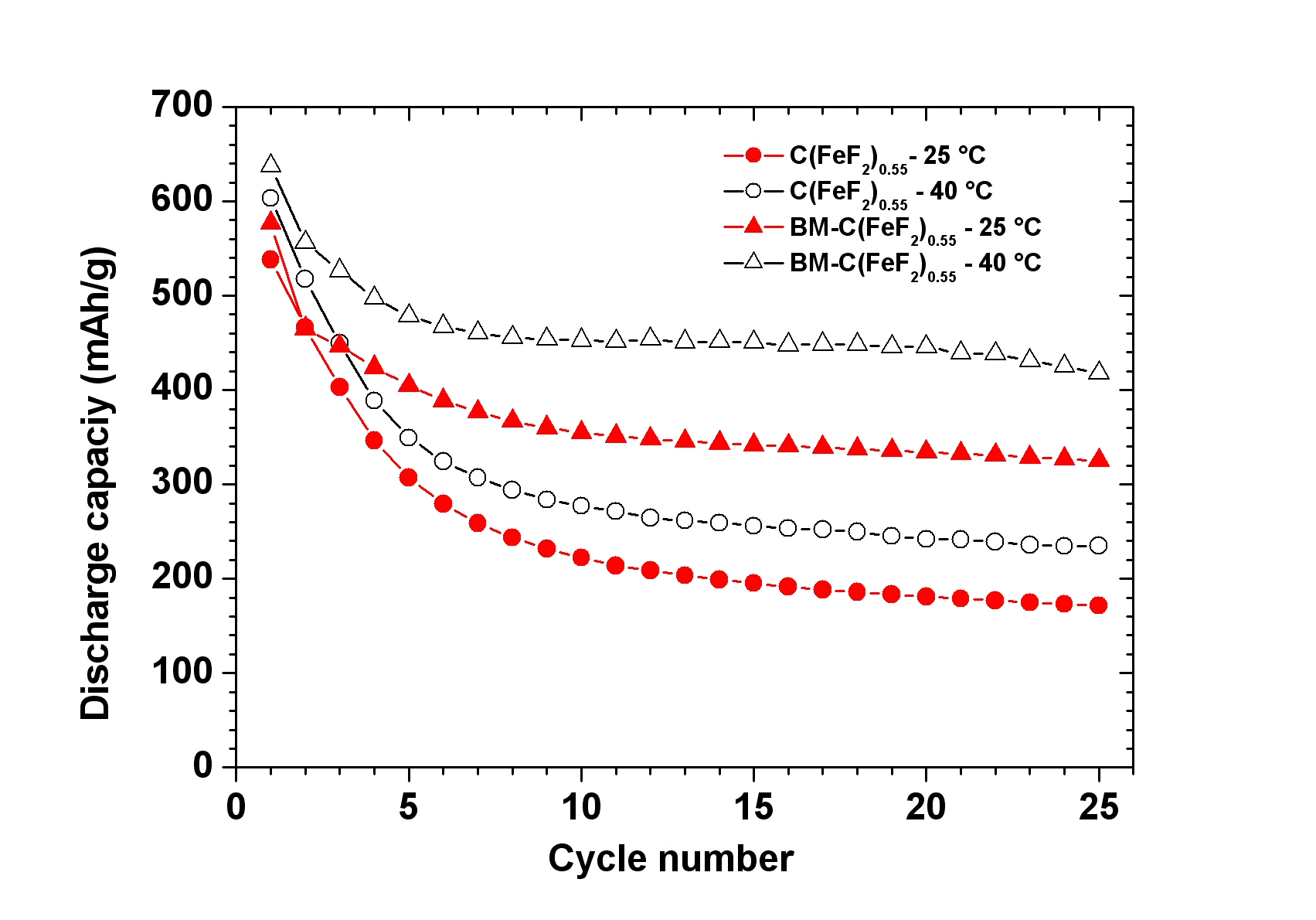 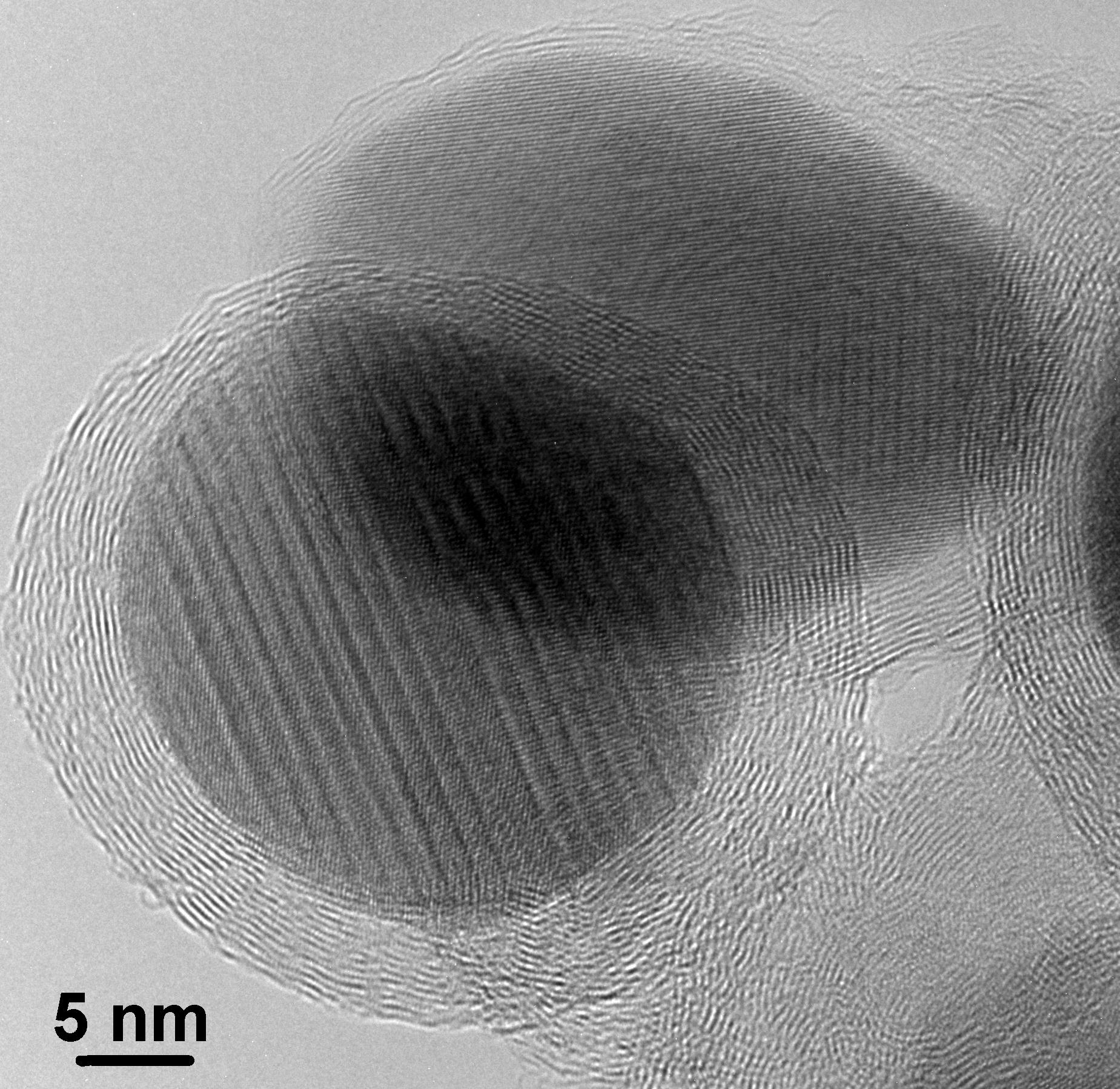 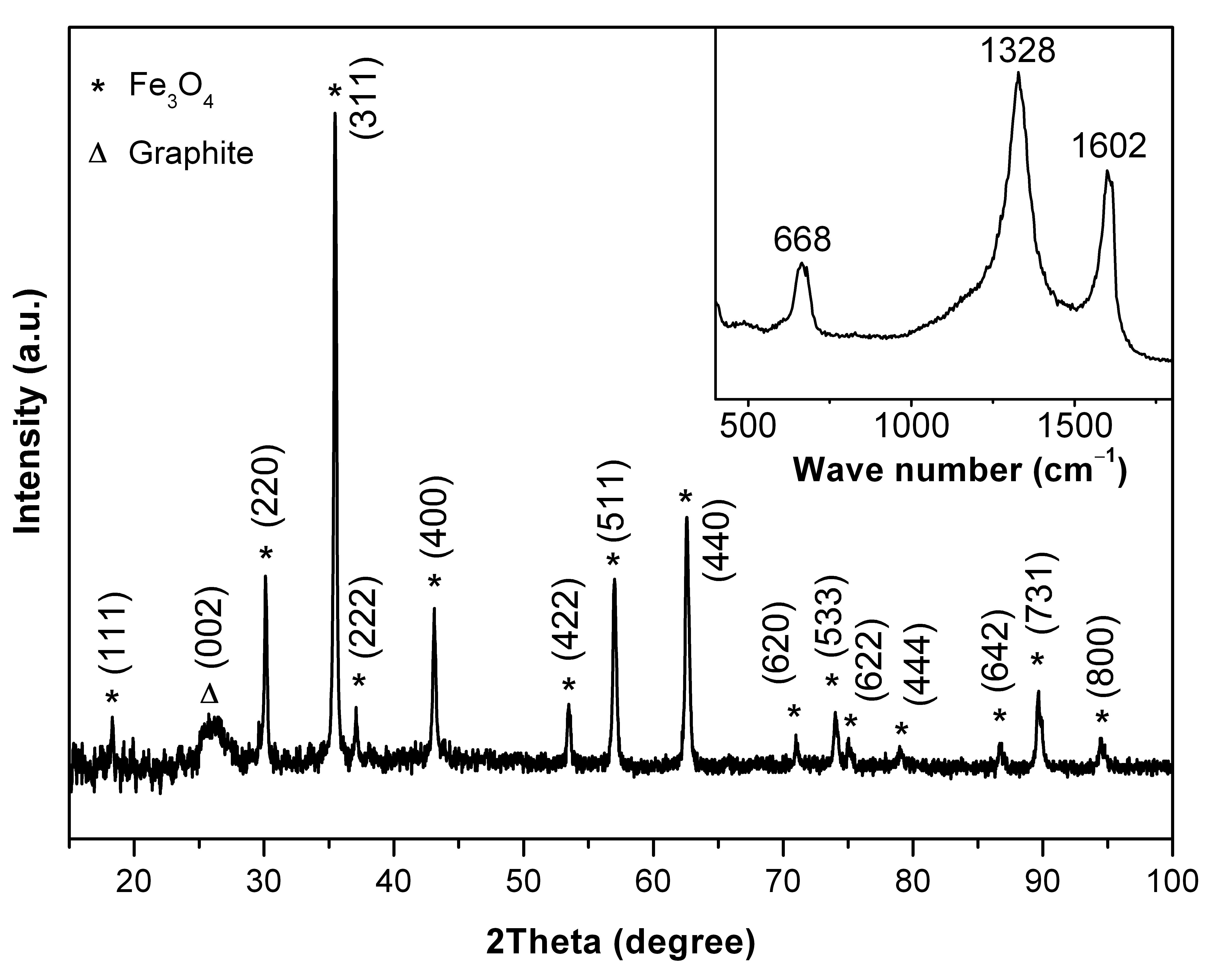 Li/CFx primary batteries offer high theoretical capacity compared to other primary batteries, such as Li/SOCl2 and Li/MnO2 which makes them suitable for long operating and small medical devices, for example. However, the power density of Li/CFx battery is low and the battery cannot be used for high drain applications. Moreover, the energy density is reduced by comparably large amounts of conductive carbon additives.

The effect of high energy ball milling on the electrochemical performance of graphite fluoride (CFx) was investigated. A significant improvement was observed in both energy density and power density. Surprisingly, the volumetric energy density was increased up to a factor of three with ball milled materials compared to pristine materials. The gravimetric energy density was increased up to a factor of two, depending on the discharge rates. At 6C the ball milled material still delivered 40 % of its nominal capacity, whereas the pristine material did not exhibit any capacity any more. We achieved the power density of 9860 W/kg with a gravimetric energy density of 800 Wh/kg for the optimized material (M. Anji Reddy, B. Breitung, M. Fichtner, ACS Applied Materials & Interfaces 5, 21 (2013) 11207-11211) 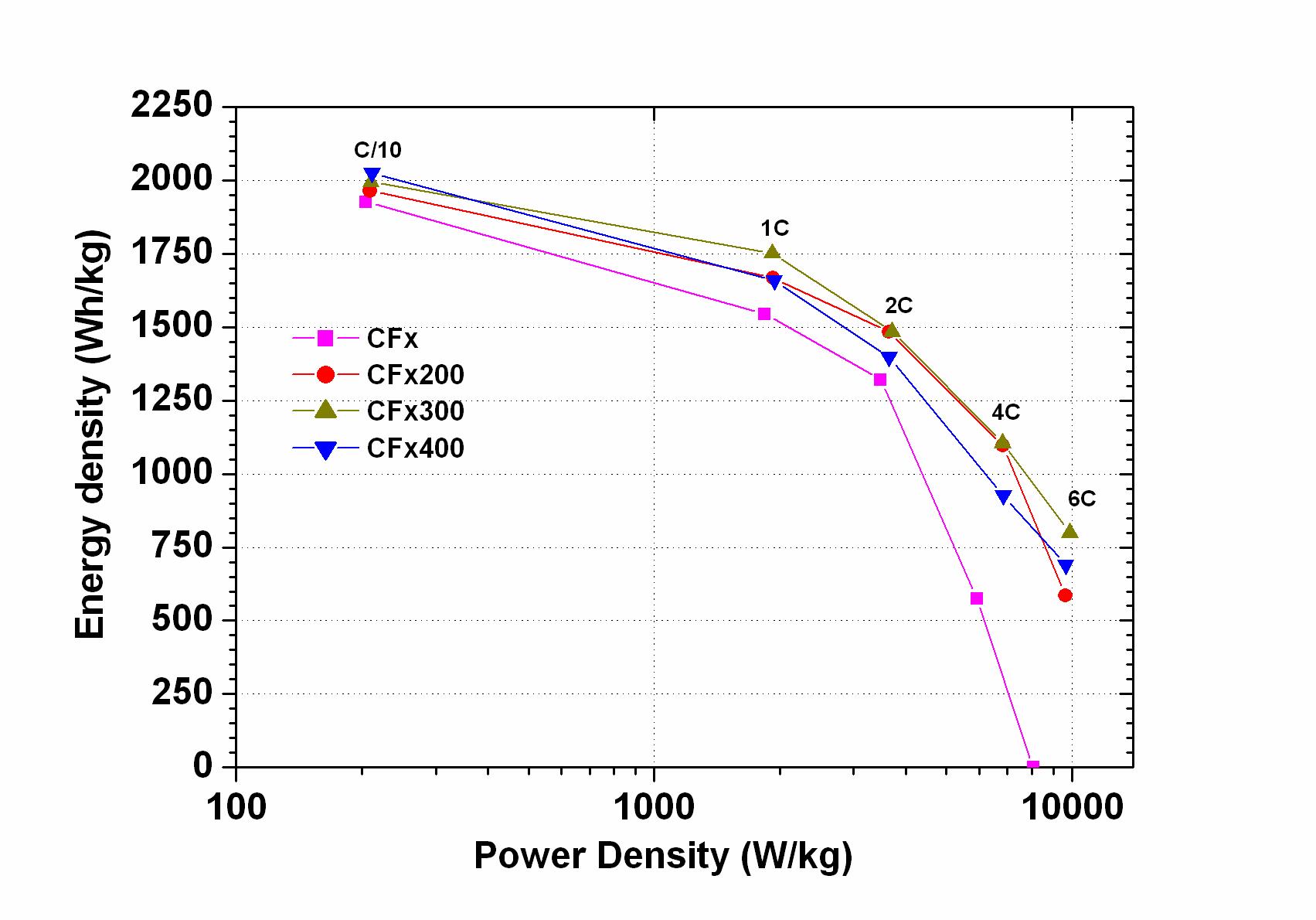 The battery activities in different media

On the radio (in German):