The following content summarizes highlights of the work at INT until 2016.
Meanwhile, the group focuses on new methods and related materials for Electrochemical Storage.

Amide-imide systems have shown promising results for hydrogen storage. Most importantly, various systems have been shown to be reversible. We have been investigating various combinations of hydrides and contributed to the understanding of the role of dopants and ball milling. Current research focuses on:

New additive combinations have been tested in order to accelerate hydrogen absorption and desorption.  The data shows that desorption is possible within a few minutes at the working temperature of a high temperature PEM fuel cell (HT-PEM, 170°C), see also U. Ulmer, J.J. Hu, M. Franzreb and M. Fichtner, INT. J. HYD. ENERGY 38 ( (2013) 1439-1449 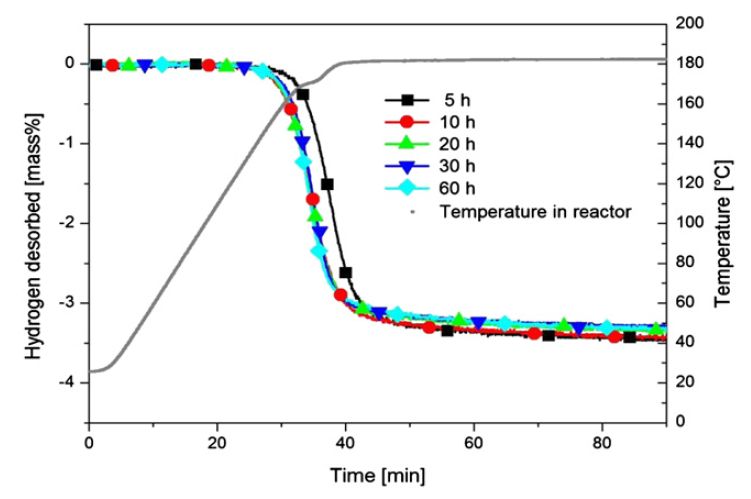 An upscale production of several kg composite material consisting of LiNH2, MgH2 and additives has been succesfully achieved. The material has been integrated and is tested in the worldwide first amide based H storage tank and is currently tested for an APU application in the framework of the EU-RTD project SSH2S: 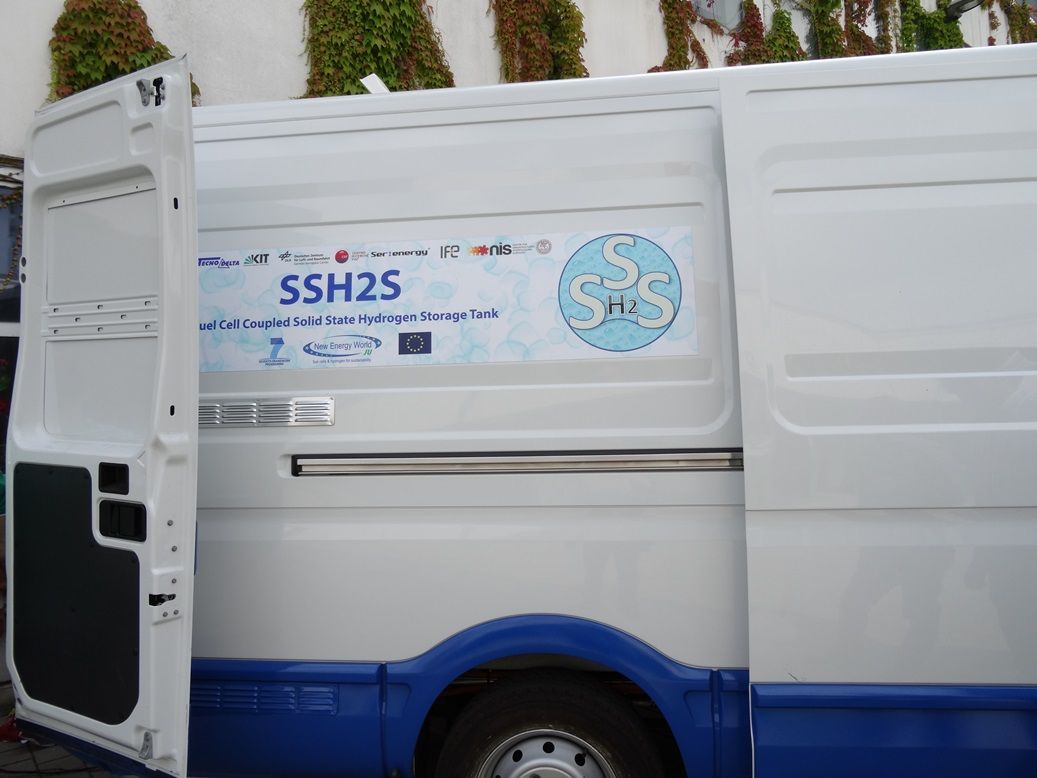 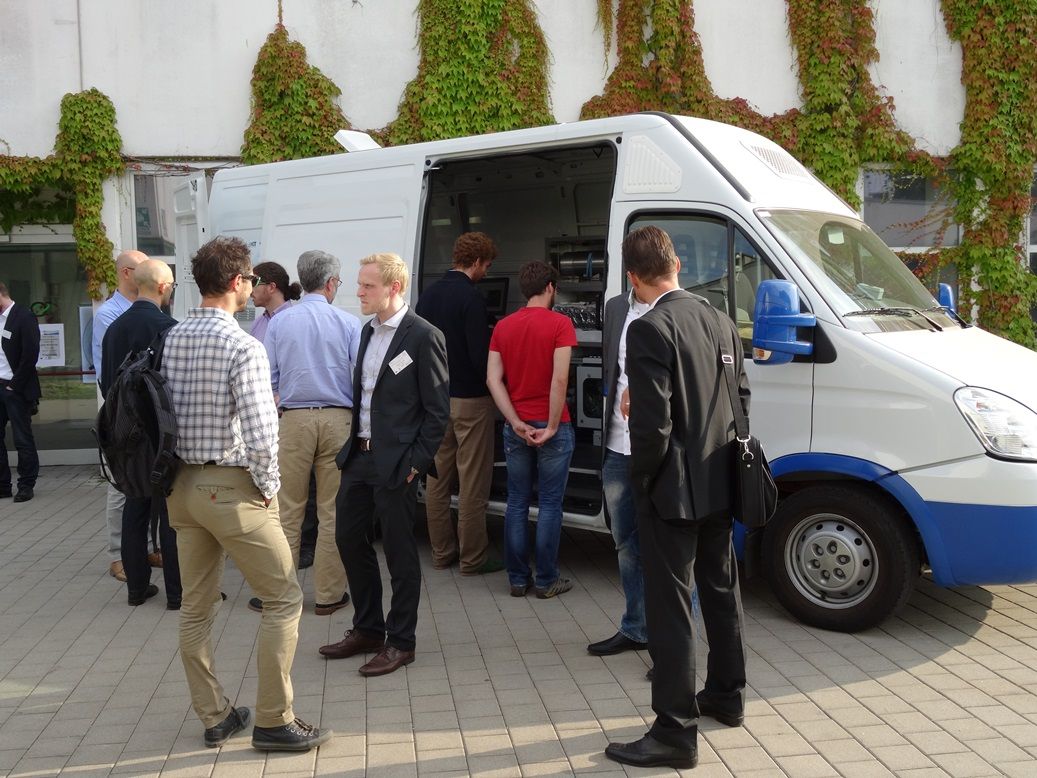 An IVECO bus has been equipped with an APU which is driven by a HT-PEMFC and an amide tank for hydrogen supply. The amide composite material for the tank was developed  and provided by KIT.

Tetrahydroaluminates or alanates are complex hydrides containing AlH4 groups. They have been studied in the context of hydrogen storage since it was discovered that the hydrogen de- and absorption can be catalyzed by doping with titanium and other transition metal and rare earth metal species.

Pure Mg alanate was synthesized in our group and the crystal structure of the compound was determined. We also synthesized Ca alanate and investigated its hydrogen storage behavior. In isothermal kinetic studies we showed for the first time that mass transport is the rate limiting step in the kinetics of the hydrogen ab- and desorption of alanates. In kinetic isotope experiments, AlHx was found to be the mobile species in the materials transformation. We also found that Ti13clusters are world-record catalysts for alanate materials. X ray absorption experiments (EXAFS, XANES) shed light on the development of the near order around the Ti atoms and showed that the dopant forms small Ti-Al clusters during cycling.

Moreover, the solid state reaction and catalysis of LiBH4 with Al, Ce and other reactants is a matter of research.

In many hydrogen storage systems it has been shown that using nano sized powders is essential for high reaction kinetics. Infiltrating hydrides into nano structures can be used to control the particle diameter and study size effects of the materials. Infiltration may considerably enhance the kinetics of ab- and desorption. Thermodynamic effects have been found, too. Current research focuses on: 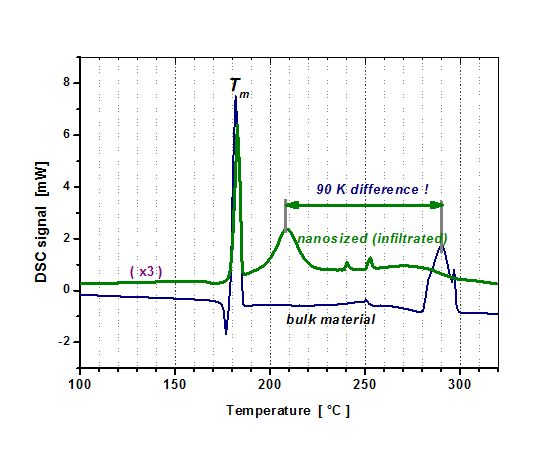 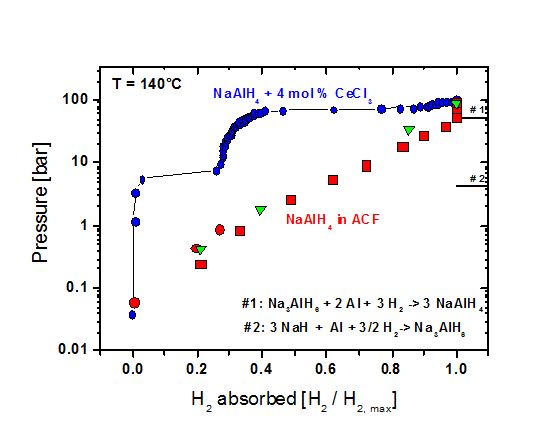 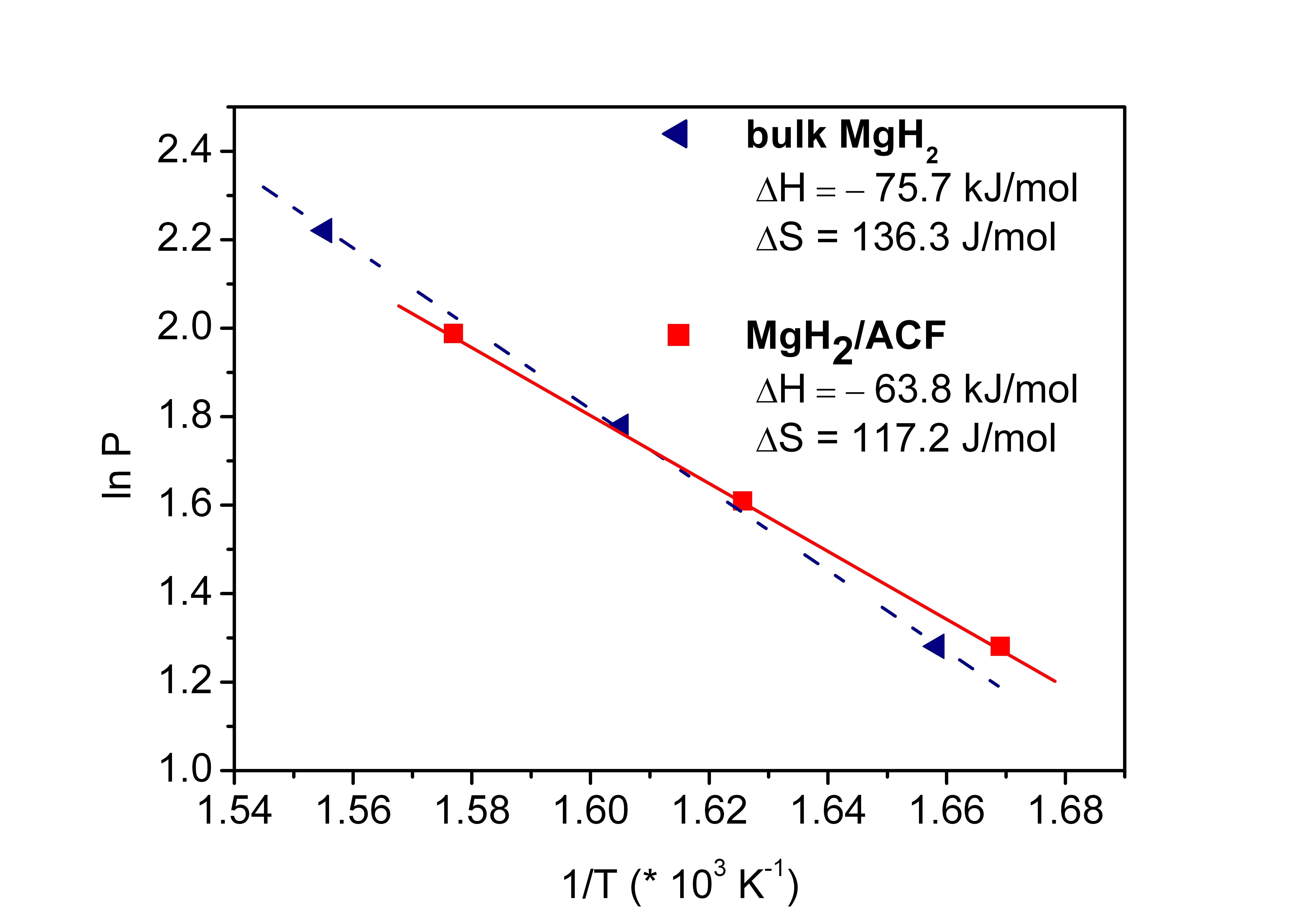 Only when the hydride materials are dispersed at the lower nanoscale, thermodynamic effects can be found. This was also shown with MgH2 infiltrated in microporous carbon. The hydride particles with approx. 1 nm in diameter showed an enthalphy of formation wich was 12 kJ/mol below that of the bulk material. At the same time, the reaction entropy was increased, see also Zh. Zhao-Karger, JJ. Hu, A. Roth, D. Wang, Ch. Kübel, W. Lohstroh and M. Fichtner, CHEM. COMM. 46, 8353-8355 (2010).

For the first time, scoping studies were performed in order to assess the behaviour of nanoscale Na-alanate powder in contact with various environments. The experiments were small scale device failure tests of alanate-filled tubular tanks, monitored by high speed and IR cameras, fast p and T sensors.
Hot powder under 10 bar H2 was ejected into various environments: dry and humid air; with and without ignition sources; into hot water and into hot mineral oil.
We could identify more and less risky or even safe scenarios. The propagation of the flame front of the powder-dust cloud was found to be much slower compared to the one of pure hydrogen.

Combining computational techniques like density theory and experimental work has in the past shown to greatly benefit the research. currently in our group DFT is used to help to understand the decomposition of Mg(BH4)2 see also: M.J. van Setten, W. Lohstroh, and M. Fichtner, JOURNAL OF MATERIALS CHEMISTRY 19 7081 (2009)