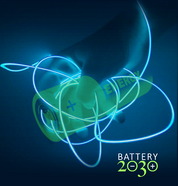 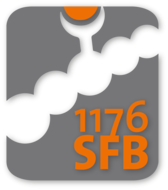 The challenge in modeling charge transport in amorphous materials is twofold. Models must incorporate effects on vastly different length scales ranging from the electronic structure of single molecules in the sub-nanometer scale to percolation effects on distances up to the micrometer scale. Charge mobility and energy dissipation during transport depend exponentially on the energy disorder in amorphous systems, making accurate quantum mechanical analysis of large molecular systems necessary.

This challenge can be tackled using a multiscale approach for the simulation of charge transport in disordered organic materials. The methodology of this approach consists of several successive steps building upon one another. For the generation of atomistic morphologies, molecule specific force field parameters are required. These are determined using a quantum mechanical analysis of single molecules. The parameters obtained in this first step are then used in classical molecular dynamics or Monte Carlo methods for the generation of amorphous thin film morphologies. These systems are analyzed using quantum mechanical methods in order to extract electronic properties relevant for charge transport. In the last step, the master equation of charge transport in the amorphous system is solved using an analytical or numerical approaches such as kinetic Monte Carlo simulations.

The dopand activation in organic semiconductors has been studied, and novel strategic goals for dopand design have been presented.

Conductivity doping of organic semiconductors is an essential prerequisite for many organic devices, but the specifics of dopant activation are still not well understood. Using many-body simulations that include Coulomb interactions and dopant ionization/de-ionization events explicitly we here show significant doping efficiency even before the electron affinity of the dopant exceeds the ionization potential of the organic matrix (p-doping), similar to organic salts. We explicitly demonstrate that the ionization of weak molecular dopants in organic semiconductors is a disorder-, rather than thermally induced process. Practical implications of this finding are a weak dependence of the ionized dopant fraction on the electron affinity of the dopant, and an enhanced ionization of the weak dopants upon increasing dopant molar fraction. As a result, strategies towards dopant optimization should aim for presently neglected goals, such as the binding energy in host-dopant charge-transfer states being responsible for the number of mobile charge carriers. Insights into reported effects are provided from the analysis of the density of states, where two novel features appear upon partial dopant ionization. The findings in this work can be used in the rational design of dopant molecules and devices.

Doping in organic semiconductors is often described in terms of models inherited from the inorganic or “classical” theory, which neglects explicit contribution of strong Coulomb interactions and the localization of the charge carriers from organic counterparts.

Here, we consider the localization of the charge carriers and their mutual interactions in the realistic energetic landscape, using kinetic Monte Carlo (kMC) method. We show that strong Coulomb interactions of the ionized host-dopant pair (integer charge-transfer complex, ICTC) lead to the formation of the EA+ (polaron) levels, which are shifted with respect to the IP of the host molecules. At the same time, the Coulomb gap is defined not only by the energy of the ICTC, but also by the material disorder. The total HOMO disorder of a doped semiconductor can decrease in the highly disordered doped material. This effect causes well-documented superlinear increase of the average mobility of charge carriers upon doping, an unexpected effect, considering that each ionized dopant creates Coulomb traps for charge carriers. We call this effect the disorder-compensation effect. Due to this effect, the intrinsic disorder of the host material is less important, which broadens the space of the host molecules that may be used in OLEDs.

We present a workflow for simulations of multilayer OLED stacks in which microscopic rates of processes involving charges and excitons are computed from first principles. The multiscale approach covers the generation of atomistic morphologies of disordered organic materials, determination of their electronic properties, and finally simulation of charge transport and excitonic processes using kinetic Monte Carlo (kMC). Applying the workflow to undoped layers made up of various organic compounds as well as prototypical OLED emission layers consisting of TCTA doped with Ir(ppy)3, we find remarkable agreement with experimental field-dependent mobility measurements as well as triplet-triplet annihilation (TTA) and triplet-polaron quenching (TPQ) rates extracted from photoluminescence quenching experiments. To demonstrate how this workflow may help understand and optimize microscopic processes underlying OLED performance, we show that, for a simplified lattice system, TPQ becomes the efficiency bottleneck at high current densities and can be significantly reduced by increasing the host material’s electron affinity.

Charge transport in disordered organic semiconductors is generally described as a result of incoherent hopping between localized states. In this work, we focus on multicomponent emissive host-guest layers as used in organic light-emitting diodes (OLEDs), and show using multiscale ab initio based modeling that charge transport can be significantly enhanced by the coherent process of molecular superexchange. Superexchange increases the rate of emitter-to-emitter hopping, in particular if the emitter molecules act as relatively deep trap states, and allows for percolation path formation in charge transport at low guest concentrations.

A first principles based multiscale model is presented, which accurately predicts charge carrier mobility of different materials varying over ten orders of magnitude. The model allows for the decomposition of the carrier mobility into molecule-specific quantities. The availability of fast and parameter-free screening tools to compute macroscopic materials properties may enable in-silico screening of the chemical compound space for the development of highly efficient opto-electronic devices.

Influence of meso and nanoscale structure

The nanoscale morphology of the bulk heterojunction absorber layer in an organic solar cell (OSC) is of key importance for its efficiency. The morphology of high performance vacuum-processed, small molecule OSCs based on oligothiophene derivatives (DCV5T-Me) blended with C60 on various length scales is studied. The analytical electron microscopic techniques such as scanning transmission electron microscopy, energy dispersive X-ray spectroscopy, highly sensitive external quantum efficiency measurements, and meso and nanoscale simulations are employed. Unique insights into the relation between processing, morphology, and efficiency of the final devices are obtained. It is shown that the connectivity of the oligothiophene-C60 network is independent of the material domain size. The decisive quantity controlling the internal quantum efficiency is the energetic disorder induced by material mixing, strongly limiting charge and exciton transport in the OSCs.

Disordered organic materials have a wide range of interesting applications, such as organic light emitting diodes, organic photovoltaics, and thin film electronics. To model electronic transport through such materials it is essential to describe the energy distribution of the available electronic states of the carriers in the material. Here, we present a self-consistent, linear-scaling first-principles approach to model environmental effects on the electronic properties of disordered molecular systems. We apply our parameter free approach to calculate the energy disorder distribution of localized charge states in a full polaron model for two widely used benchmark-systems (tris(8-hydroxyquinolinato)aluminum (Alq3) and N,N′-bis(1-naphthyl)-N,N′-diphenyl-1,1′-biphenyl-4,4′-diamine (α-NPD)) and accurately reproduce the experimental charge carrier mobility over a range of 4 orders of magnitude. The method can be generalized to determine electronic and optical properties of more complex systems, e.g. guest-host morphologies, organic–organic interfaces, and thus offers the potential to significantly contribute to de novo materials design.

last change: 2020-06-06 KIT – The Research University in the Helmholtz Association