Metallic nanoglasses represent a novel development in the field of disordered materials, which was initiated by our research group. In contrast to the metallic glasses, which have been widely reported in the literature and are synthesized by rapid quenching from the molten state, nanoglasses are prepared by consolidation (compaction) of nanoparticles, i.e. completely in the solid state.

It has been demonstrated that nanoglasses exhibit a different structure and as a consequence also different properties compared to rapidly-quenched glasses. Clearly, the presence of the internal nanostructure is the prerequisite of the modified properties.

Metallic nanoglasses have been initially synthesized using the well-established Inert Gas Condensation (IGC) technique, using thermal evaporation of an alloy. As the evaporation is performed in an inert gas atmosphere, nanoparticles are formed, typically in the size range of 5 to 20 nm (average) controlled by the synthesis parameters (total pressure of the inert gas, partial pressure of the evaporating alloy components and type of inert gas). The nanoparticles are transported by the convective inert gas flow from the hot source to a liquid nitrogen cooled cylindrical collector. The nanoparticulate powder is collected and then scraped from the surface of the cold finger, and transferred to an in situ (vacuum) compaction device. The nanopowder is compacted at pressures up to 2 GPa, and subsequently, can be compacted further in an ex situ compaction device, typically up to pressures of 6 GPa.

Alternatively, a sputtering source can be used instead of the thermal evaporation source, thus allowing the preparation of alloys consisting of elements with different vapor pressures. A third alternative is the use of laser ablation in order to vaporize the master alloy. In our group all three systems are employed to prepare a variety of metallic nanoglasses of different material systems.

In order to prepare even smaller building blocks for the controlled assembly of nanoglasses, we have developed a cluster ion beam deposition system. In this system, clusters containing typically 50 to 1000 atoms, i.e., smaller than 3 nm in diameter, are prepared using a sputter source, and subsequently formed into a cluster ion beam, which can be manipulated inside a UHV beamline by means of electrical and magnetic fields. Using a 90° bending magnet, size selected clusters can be prepared. The impact energy of the cluster ions can be controlled by means of electric fields, from soft landing to hard landing on the substrates, resulting in a variety of different amorphous structures.

Fig. NG3: Photo of the sputter deposition system for the preparation of thin and thick films with a columnar nanoglass structure (left) and SEM image of the columnar structures observed in a sputtered film (right).

Using the above synthesis routes, our group has synthesized many different amorphous alloy systems in the nanoglass structure, including PdSi, FeSc, CuZr, CuSc using the compaction route starting from nanoparticles, and NiTiCu, PdSi and TiZrCuPd films using the film sputtering technique.

The current understanding based on the results of the above mentioned techniques of the structure of nanoglasses is as follows:

As a consequence of the structural differences between the nanoglasses and the rapidly quenched counterparts, also the mechanical, magnetic and thermal properties are drastically different. 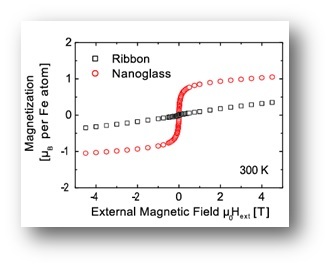 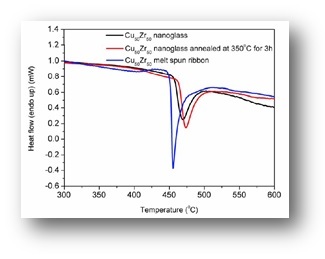 Nanoglass- material of the future

Learn more about Nanoglass in this interview with our institute director, Professor Horst Hahn, on YouTube (German).

last change: 2020-02-13 KIT – The Research University in the Helmholtz Association