The concept of tunable properties encompasses composite nanostructures whose physical properties can be controlled both reversibly and dynamically by the application of an external electrical stimulus. This is readily achieved using nanomaterials and nanostructures owing to their large ratio of interface-to-volume.

The stimulus can be provided by various means, e.g. dielectric, ferroelectric, and electrolyte gating which induces an electric charge at the interface of the functional material leading to charge carrier doping (electric field effect) and thus to a reversibly tuned property change. However going beyond that concept, reversible ion intercalation (reversible electrochemistry), which includes ion transfer across the interface can also effectively alter the materials property. In between these two mechanism, reversible surface chemistry (redox pseudocapacitance), displays an effective tools to obtain sizeable surface charges. The different tuning approaches employed in the Tunables group are illustrated schematically in the figure below. 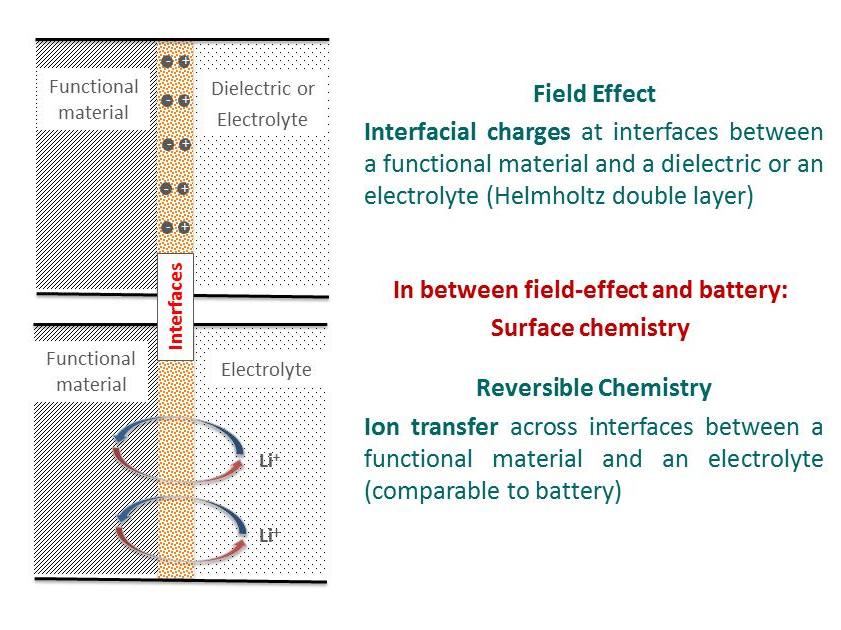 The research focus of the Tunables group addresses the control of magnetic properties in nanomaterials. In the following some recent examples of reversible magnetic tuning employing the above introduced approaches are presented. Especially the large flexibility of the liquid gating approach allows for the use of a multitude of morphologies ranging from epitaxial thin films, over nanoporous thin films to nanopowders.

The primary objective of our research is to establish scientific foundations enabling the design, fabrication and then reversible control of nanomaterials properties to explore their potential for applications.

Electric field tuning of magnetism is one of the most intensely pursued research topics of recent times aiming at the development of new-generation low-power spintronics and microelectronics. However, a reversible magnetoelectric effect with an on/off ratio suitable for easy and precise device operation is yet to be achieved. We found a novel route to robustly tune magnetism via the charging/discharging processes of hybrid supercapacitors, which involve electrostatic (electric-double-layer capacitance) and electrochemical (pseudocapacitance) doping. We use both charging mechanisms occurring at the La0.74Sr0.26MnO3/ionic liquid interface to control the balance between ferromagnetic and non-ferromagnetic phases of La1-xSrxMnO3 to an unprecedented extent. A magnetic modulation of up to ~33% is reached above room temperature when applying an external potential of only about 2.0 V. Our case study intends to draw attention to new, reversible physico-chemical phenomena in the rather unexplored area of magnetoelectric supercapacitors.

(a) Schematic of the electrochemical tuning cell: a La0.74Sr0.26MnO3 (LSMO) single-crystal thin film (≈13 nm) grown on a SrTiO3 substrate and a high-surface-area carbon cloth serve as working (WE) and counter (CE) electrodes, respectively. The electrodes are separated by an insulating glass fibre (not shown). On application of an external voltage, the ions of the ionic liquid (DEME+-TFSI−) form physical or chemical bonds with the LSMO surface leading to electrostatic (electric-double-layer (EDL) capacitance) or electrochemical (pseudocapacitance (PS)) charge carrier doping, respectively. Both mechanisms allow for manipulating the magnetic state of LSMO. (b) Example of in situ tuning experiment performed at 323 K: the magnetic response (in red) reversibly follows the surface charge modulation (in blue), calculated by integrating the measured current density (in green), on repetitive cycling of the external potential (in black)

The magnetoelectric coupling at ferromagnetic/ferroelectric interfaces in epitaxial La1−xSrxMnO3/Pb(Zr,Ti)O3 (LSMO/PZT) heterostructures was studied. The remarkably high lateral uniformity achieved in such films allowed for a ferroelectric device area of more than 6 mm2. This has enabled for superconductive quantum interference device (SQUID) measurements of the magnetic response to the systematically, completely in situ, varied remanent ferroelectric polarization. Temperature dependence of the magnetic modulation upon charging and the magnetic response to the ferroelectric stimulation indicate a field-effect dominated coupling mechanism and generally confirm the concept of electrostatic hole doping of LSMO.

(a) Transmission electron microscopy crossectional view of the LSMO/PZT heterostructure.

To go beyond the interfacial effects, intercalation-driven electrochemical approaches are proposed which can, in contrast to the field effect concepts, also be pertinent to bulk materials. The concept is demonstrated here for ferromagnetic iron oxide by a judicious control over the reversible lithium chemistry. The insertion of lithium ions results in a valence change and partial redistribution of the Fe 3+ cations in the spinel structure, thus yielding a large (up to 30%) and fully reversible change in magnetization at room temperature. Considering the availability of a large number of intercalation-friendly magnetic materials, ample opportunities for increasing the effect size towards a complete on-and-off magnetic switching can be foreseen, thereby paving ways for applications involving micro-magnetic actuation.