Characterization of Battery Materials and Systems

The development of advanced materials for new batteries increasingly focuses on nanostructured composites to combine high electron and ion conductivity for new cathode materials. These nano composites typically exhibit a complex morphology geared to maintain high capacity over extended charging/discharging cycles. The aim of the electron microscopy & spectroscopy group is to characterize the morphology and composition of the active battery materials at the atomic to nanometer scale in 2D and also 3D using a combination of high-resolution imaging (TEM, HAADF-STEM), diffraction (ACOM-STEM), spectroscopy (EELS, EDX) and tomographic techniques to correlate the structure and morphology at different charging states with the cyclic stability. To some extent, this characterization is possible using well-developed ex situ analytical (S)TEM techniques that only need to be optimized to deal with the electron beam sensitivity of most battery materials. However, for a more direct analysis of the structural changes during electrochemical cycling, we are also actively developing new techniques for in situ imaging of micron/nano-sized battery models inside the TEM.

Understanding the microscopic mechanism of the de/lithiation processes during electrical cycling is crucial for improving the design of battery materials. A major challenge is the experimental detection of the lithium distribution in partially charged/discharged batteries at the nanoscale because of the weak interaction between Li atoms and fast electrons. In our recent work in collaboration with Prof. Poul Norby from Danish Technical University, we applied a STEM diffraction technique (automated crystal orientation mapping (ACOM)) to map the lithiation distribution in a half discharged lithium iron phosphate (LiFePO4/FePO4, LFP/FP) battery. We found that the majority of the nanoparticles are either completely LFP or FP. However, in addition, quite a number of (single crystalline) particles contain both LFP and FP phases with a planar interface (Figure 1.1). According to the crystallographic information provided by ACOM (Figure 1.2), we found that the LFP/FP interface is preferentially orientated normal to the [101] crystalline direction but not the widely speculated [100] or [010] axes. An average 1.5⁰ misorientation between the LFP and FP domains was detected. This implies that in addition to dislocations, lattice tilting plays a role to release the lattice mismatch between LFP and FP. This experimentally confirms the theoretical predictions based on the interfacial strain energy. 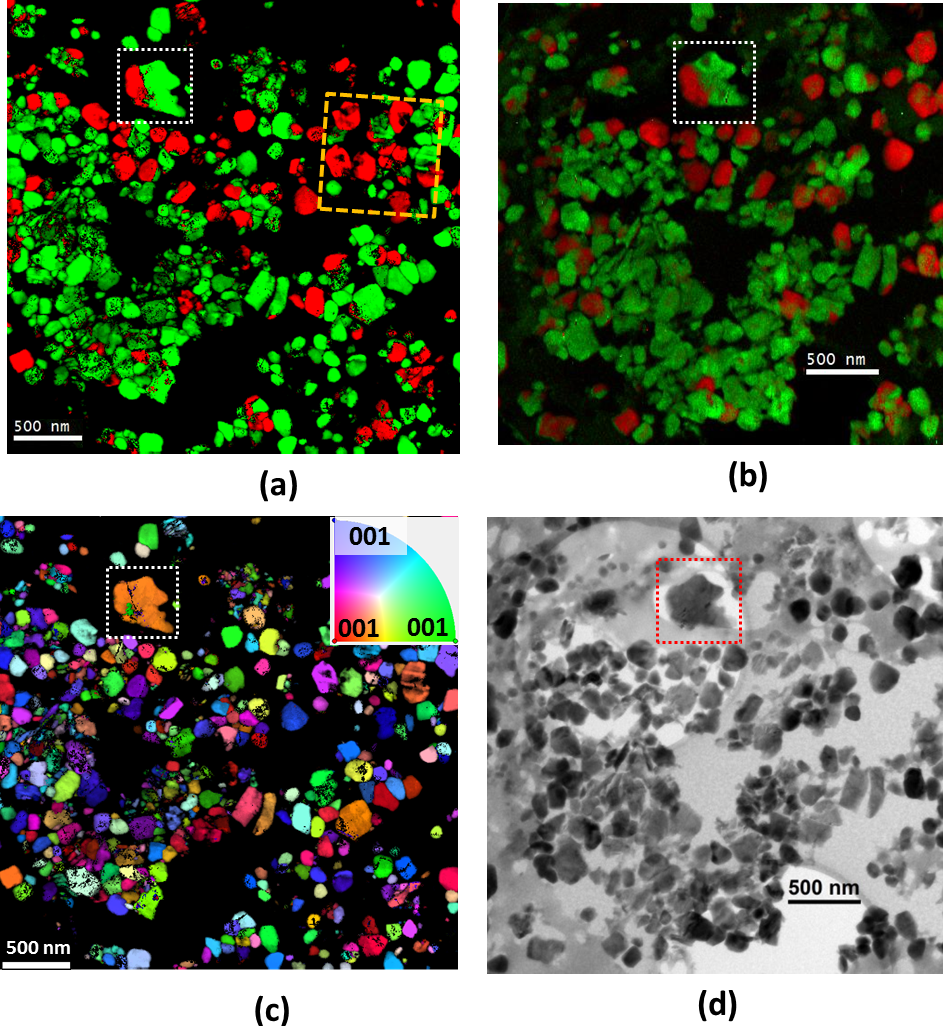 Figure 1.1: (a) ACOM-STEM Phase map of LFP (green) and FP (red) based on the crystallographic difference between both systems. (b) Phase map obtained by EFTEM-SI at the Fe-L3,2 edge (Fe valance state map) (LiFePO4: green, FePO4: red). (c) ACOM-TEM crystal orientation map. The inverse pole figure color coding is given as inset. (d) Bright-field image of the same area as c. The white boxes in a,b and c and the red box in d indicate same particle for visual guidance.

Figure 1.2: (a) ACOM phase and orientation maps of single crystalline particles with an FP/LFP interface and (b) the corresponding statistical analysis of the orientation distribution of the interface shown as orientation density in the inverse pole figure.

Spectroscopic techniques (energy filtered TEM) were applied to analyze the same sample area. The lithium distribution was analyzed 1) mapping the iron oxidation state using the Fe-L3,2 edge, 2) using the Li-K/Fe-M edges, 3) looking at the dielectric function by Kramers-Kronig analysis and 4) based on the plasmon center position. From a methodology point of view, this enabled a direct test of the consistency of the crystallography (ACOM) and oxidation/electronic states (EFTEM/EELS). The maps obtained by all methods showed excellent agreement with each other. A comprehensive comparison of all methods is done in terms of reliability, information content, dose level, acquisition time and signal quality (Table 1). The latter three are relevant for the design of in situ experiments with beam sensitive Li-ion battery materials. 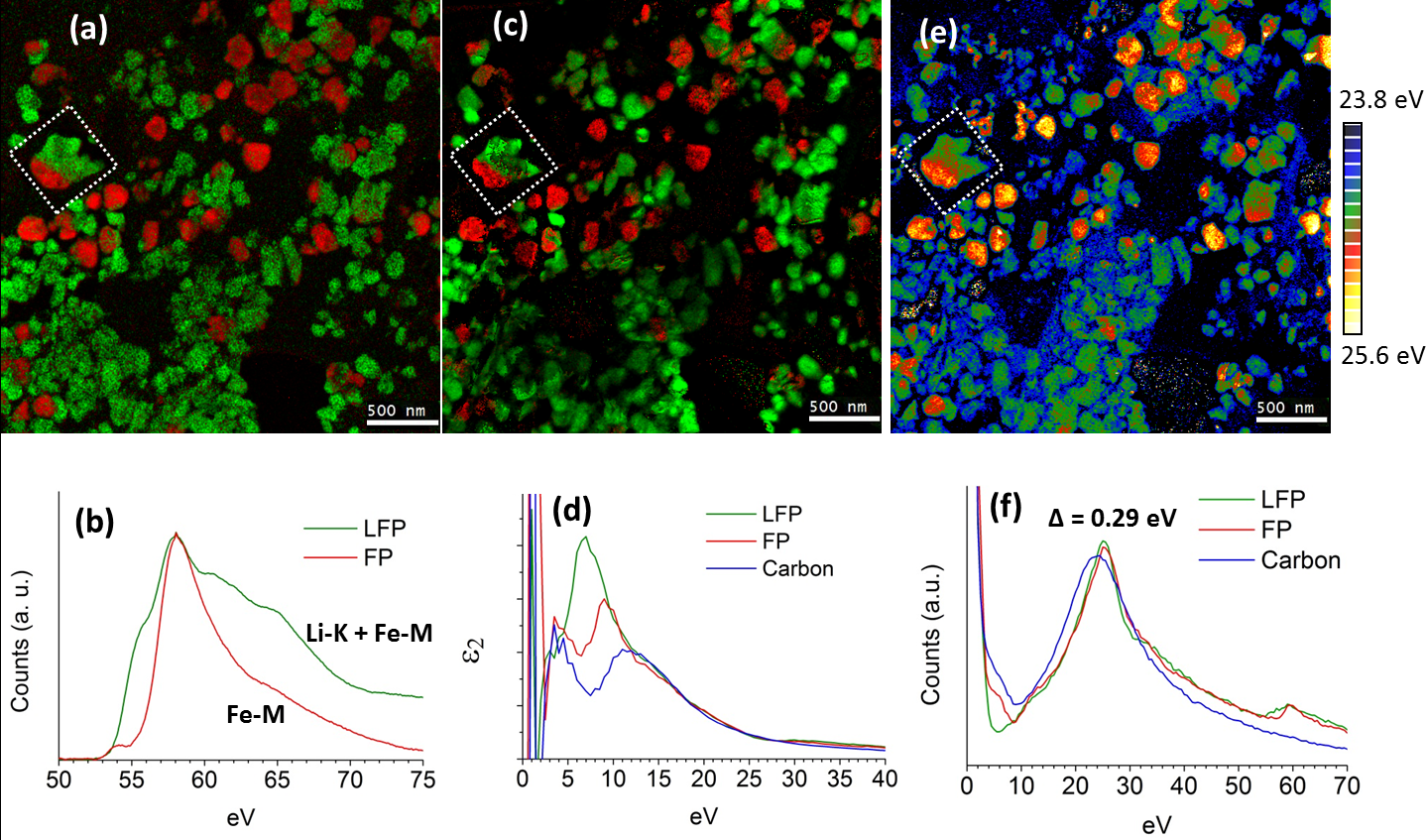 Figure 1.3: EFTEM phase maps (a) from Li-K & Fe-M signals in (b), (c) according to the dielectric functions shown in (d) computed by Kramers-Kronig equation from the signal caused by interband transitions. (e) Volume plasma center map. (f) low-loss spectra of LFP, FP and carbon substance.


Details have been published at

This project has been third-party funded by the European Union through the 7th framework program for research, technological development and demonstration under grant agreement No. 608575.

The increasing demand for the performance of energy storage systems is driving the search for alternative battery chemistries beyond Lithium ion batteries (LIBs). Na-, Mg-, Al-, Cl-, K- and F-ion batteries have been introduced as alternative electrochemical systems. Rechargeable batteries based on a fluoride anion shuttle are a promising with energy densities of more than 5000 WhL-1 (50% above the theoretical capacity of the Li air cell). The fluoride ion battery, based on a solid-state electrolyte, is currently developed in the group of Prof. Max Fichtner at the KIT. Figure ‎2.1 shows a schematic of a fluoride ion battery, illustrating the cycling process. The cell consists of a metal (Mʹ) electrode as anode and a metal fluoride (MFx) electrode as cathode in the charged state. During discharging, fluoride anions (F-) will migrate from the cathode (MFx) to the anode (Mʹ) through the electrolyte forming a metal fluoride MʹFx at the anode. At the same time, the electrons provide the work in the external circuit moving from anode to cathode. The equations of the corresponding cathodic and anodic reactions that describe the discharging process are as follows: 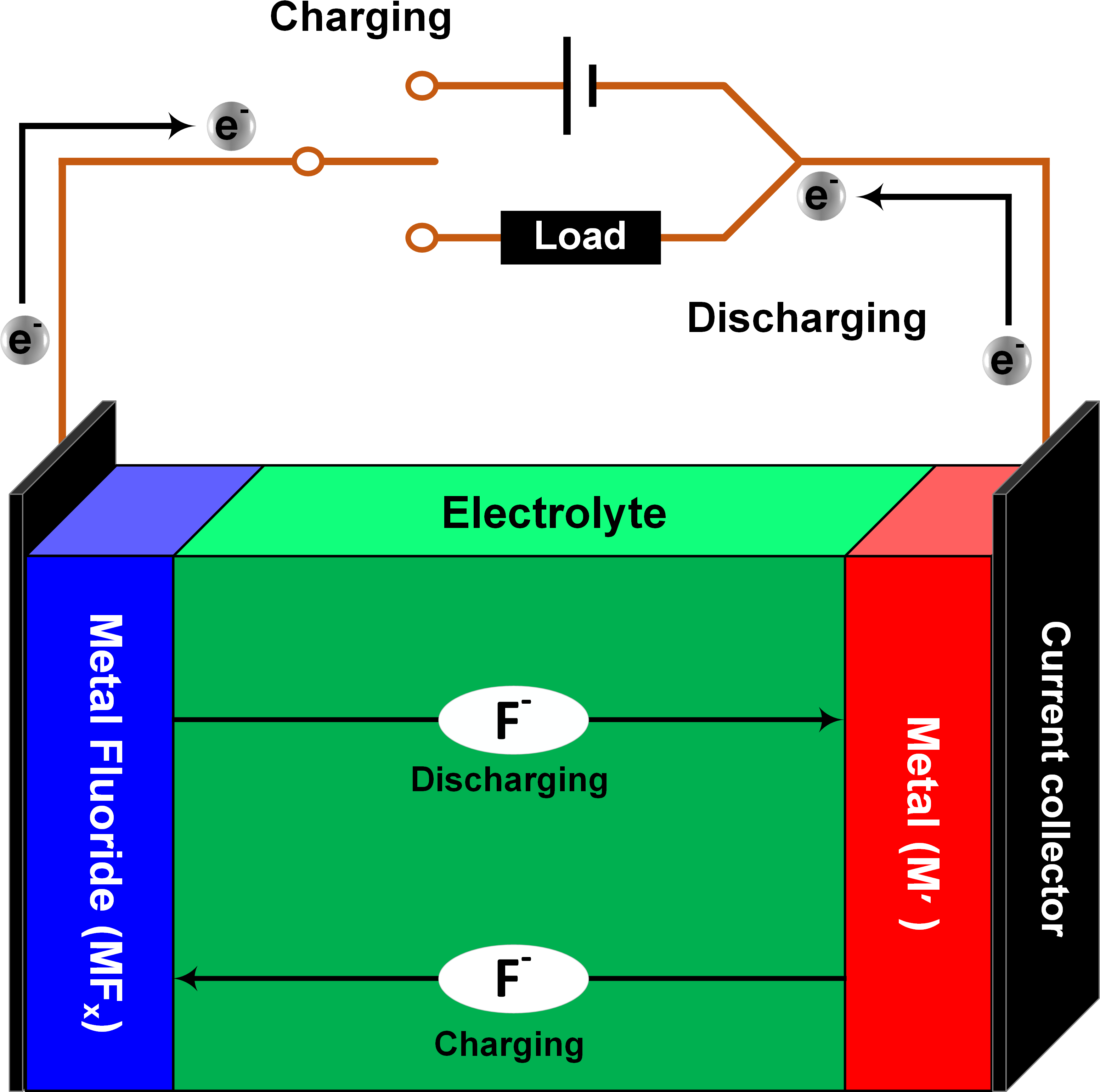 In collaboration with the group of Prof. Max Fichtner, interfacial studies were performed by TEM to understand the structural changes at the cathode-electrolyte and anode-electrolyte interfaces, providing new insight into the conversion reaction as well as the degradation mechanism of fluoride ion batteries. The fluoride ion battery consisted of a CuF2 composite as cathode, La0.9Ba0.1F2.9 as an electrolyte, and a La-sheet as anode. The electrochemical cycling was performed at an elevated temperature of 150 ˚C by applying a current density of 10 mA cm-2. Three different states of the system have been studied, as-prepared, discharged, and recharged. Our FIB was used to lift out two lamellae from each pellet at the electrodes-electrolyte interfaces. HRTEM analysis of the cathode confirmed the formation of Cu metal after discharging as a result of CuF2 reduction, while the copper fluoride was formed after recharging, validating the concept of the fluoride ion battery (Figure 2.2). Moreover, The TEM investigation of the anode-electrolyte interface revealed a structural variation upon cycling with the formation of intermediate layers (Figure 2.3) consisting of LaF3 and La2O3 after discharging. During recharging LaOF was irreversibly formed providing one explanation for the reduced capacity of the battery after recharging (Figure 2.3d). 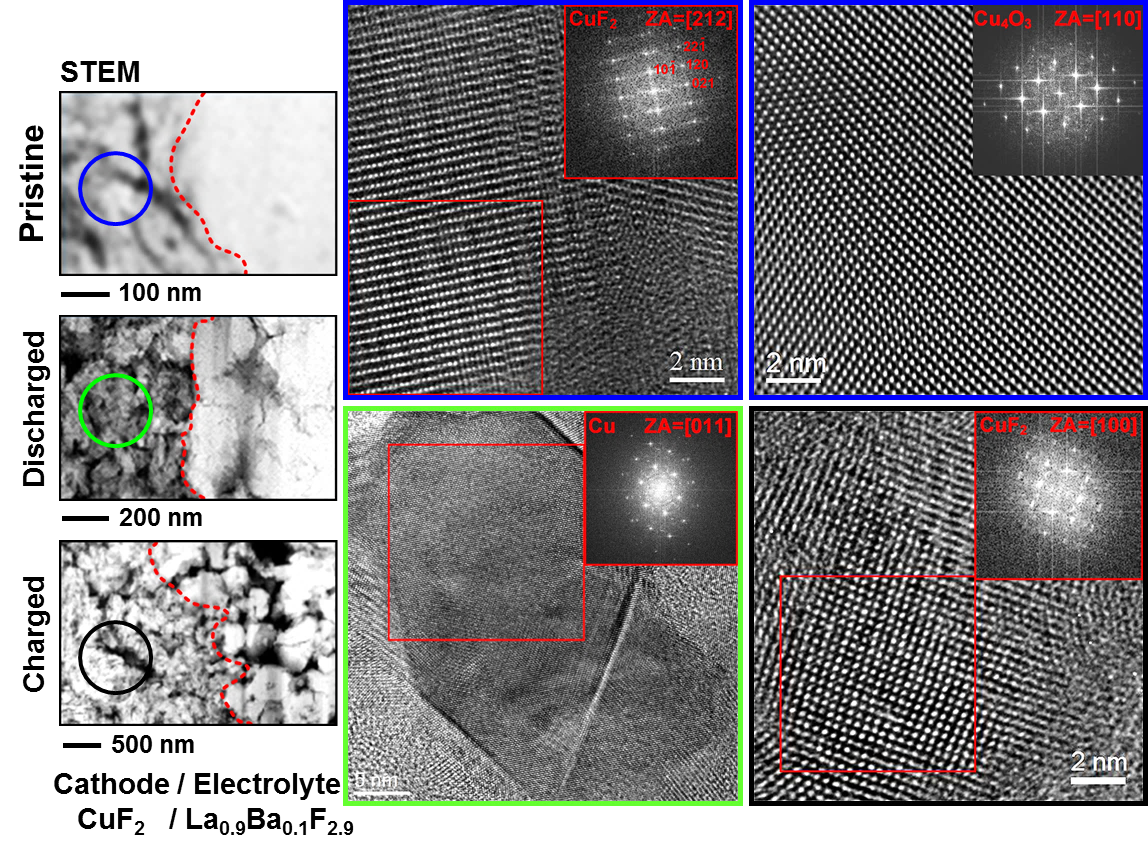 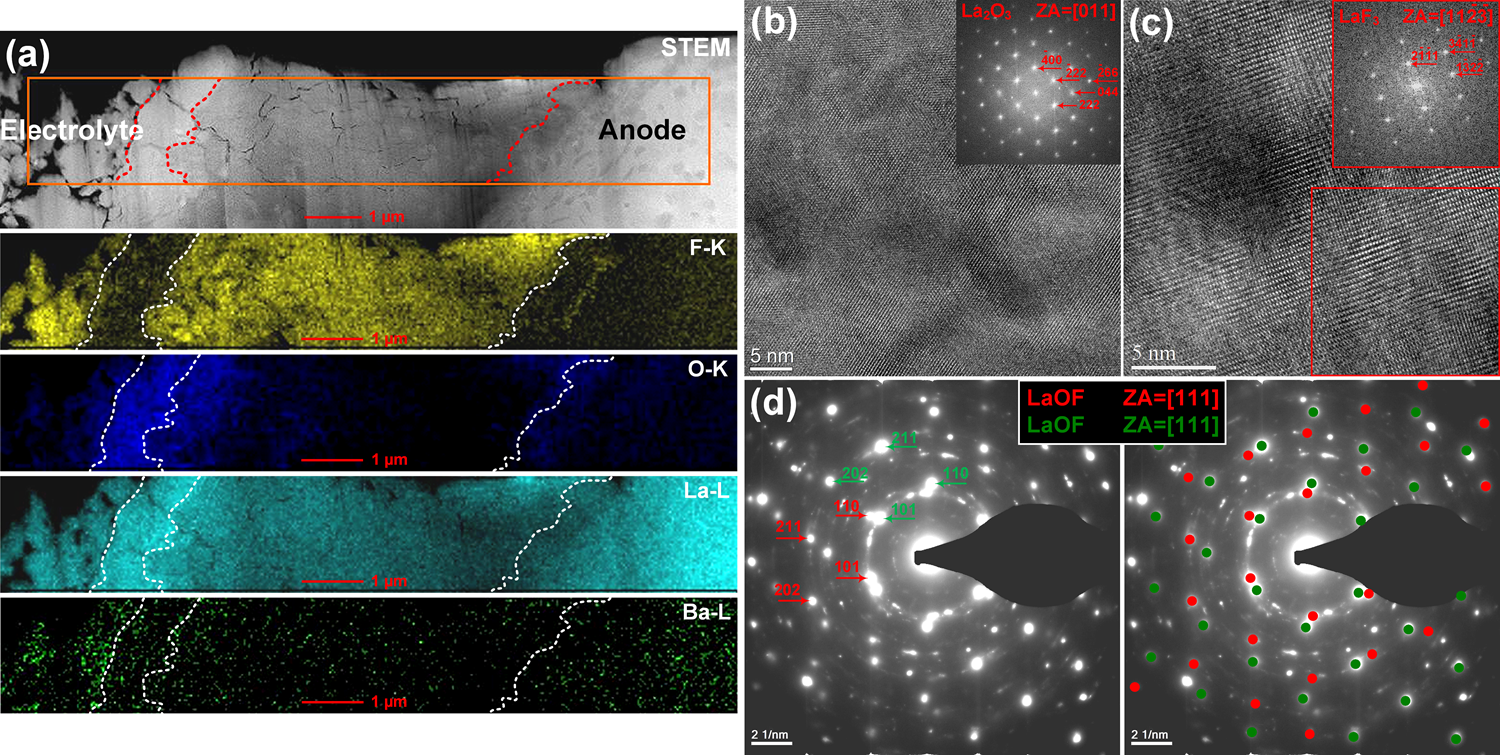 In addition to the ex situ TEM analysis shown above, we are developing new preparation and analysis approaches to follow the structural changes in the micron-sized all-solid-state batteries and half-cells in situ using TEM techniques. The FIB has been used to cut a thin cross-section from an all-solid-state battery that is then mounted and contacted to the electrical contacts of a MEMS device (Figure 2.4). The MEMS device, carrying the micron-sized battery, is transferred under (close to) inert conditions to an Aduro sample holder in the TEM for in situ cycling (Figure 2.5).

Figure ‎2.4: SEM images of (a) blank MEMS device (Protochips E-AEK11) with a 50 µm wide separation between Pt electrical contacts, and (b) an actual micron-sized battery mounted on a MEMS device.

Figure 2.5: An Aduro sample holder from Protochips company for in situ TEM electrical biasing, heating up to 1200 °C and electrothermal analysis. (*) http://www.protochips.com/products/fusion/.

The batteries that have been studied by in situ TEM are all-solid-state fluoride ion batteries. We have performed a first successful in situ cycling experiments for two systems of all-solid-state fluoride ion batteries, where reasonable I-V charging-discharging curves have been obtained. Moreover, the structural and compositional changes during cycling were imaged. The two systems that are cycled in situ TEM are:

Fig. 3.4: a) BF-TEM overview image of aggregates of Fe/C nanoparticles with LiF in between and interconnected by MWCNTs; b/c) HRTEM images of the Fe/C nanoparticles consisting of an α-iron core and a shell typically of in-situ TEM characterization of up to 3-5 graphene layers.