In collaboration with Prof. Wei Wangs group from Nankai University, we have studied the self-assembly of Janus type molecule consisting of a polyoxymetallate (POM) and a silsesquioxanes (POSS) interconnected by different organic linkers to understand the fundamental contributions controlling the self-assembled structure.

As one example, we have studied the supramolecular assembly of POM-C4-POSS molecules using low-dose HAADF-STEM and STEM tomography. Electron tomography revealed the formation of a hexagonal columnar self-assembled structure in agreement with coarse-grained simulations of the self-assembled structure. A more detailed analysis by low-dose STEM shows that the hexagonal structure consists of a core of POSS and the organic linker and the walls consist of a POM bilayer (Figure 1). However, the low-dose STEM images also reveal that the structure is not a regular hexagonal network, but a significantly distorted, tessellated structure (Figure 2). Moreover, also the arrangement of the POM clusters is varying within the bilayer. This is the results of structural frustration with phase separation favoring a hexagonal arrangement, whereas a regular packing of the POM layers would require straight interfaces. As the short organic linker only enables a very limited distance between the POM and POSS groups, the apparent solution is the distorted structure providing a local compromise between both controlling forces. 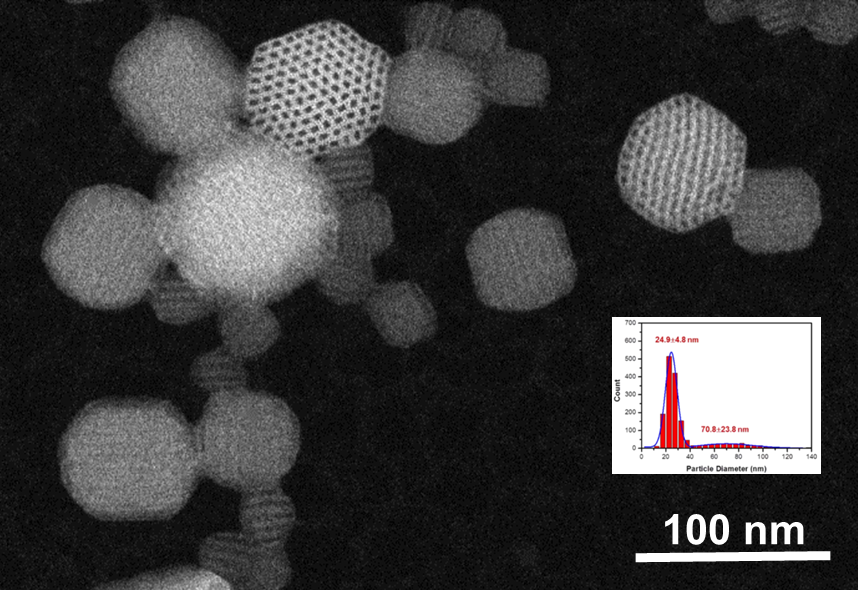 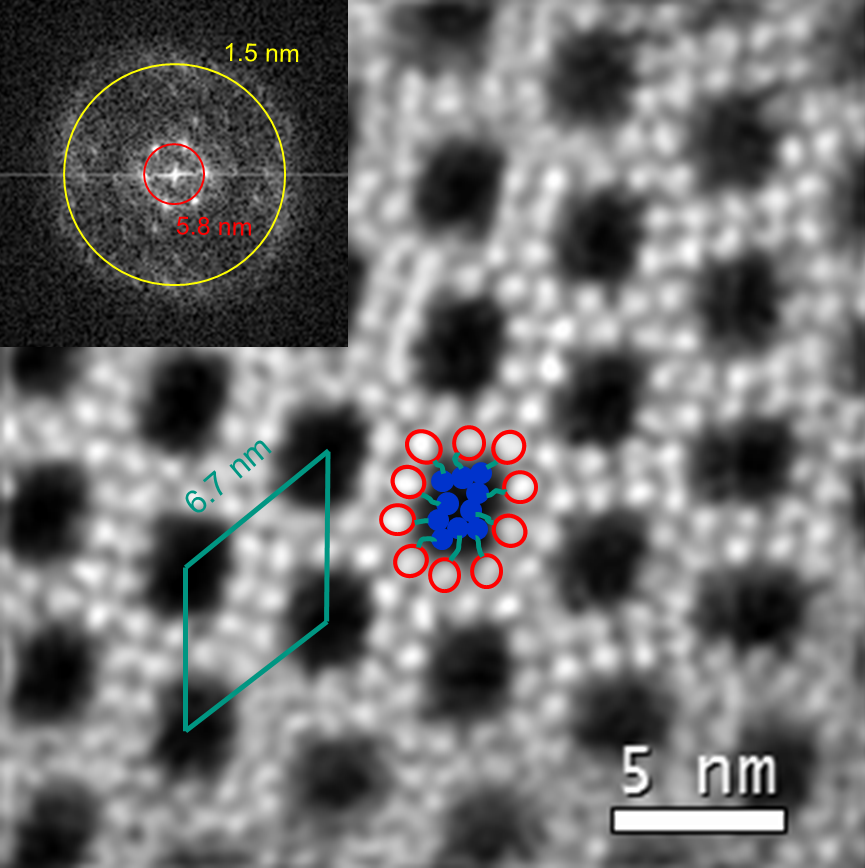 Figure 1: Low-dose HAADF-STEM image of POM-C4-POSS showing a hexagonal columnar structure for suitably oriented crystals. The detailed image on the right reveals the individual POM clusters as bright dots arranged in a bilayer around the POSS core. 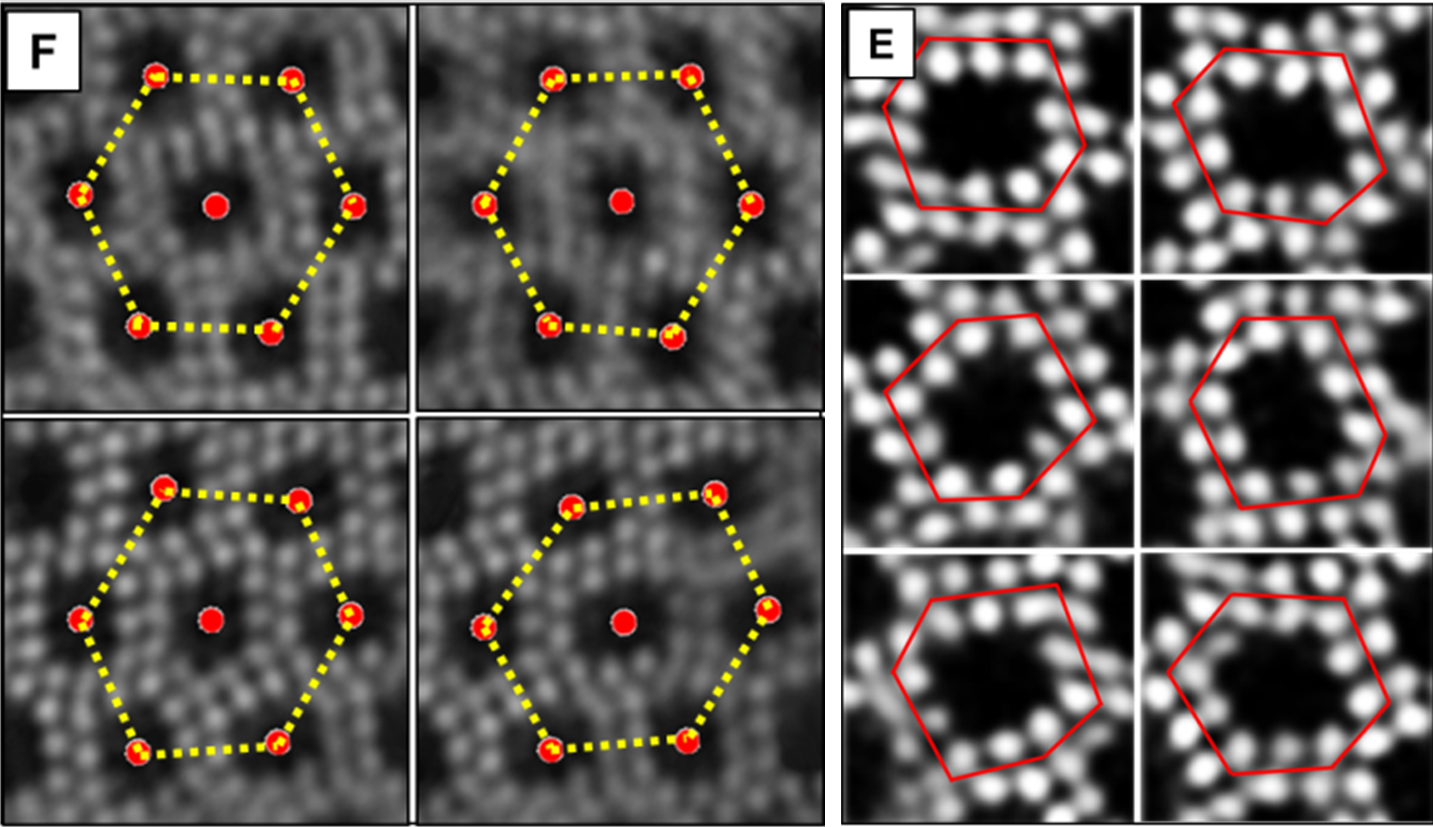 The low-dose STEM images further reveal characteristic defects close to the surface of the nanoparticles consisting of extended POM/POSS layers with only a single POM row at the surface (figure 3). These defects are presumable the starting point for the bicrystals often observed in electron tomography sharing a common {100} plane.

Details of this study have been published and are available at

Changing the linker between the POM and POSS cluster, tuning the length and flexibility, results in completely different self-assembled structured. One example where the structure was analyzed in detail throughout the self-assembly process leading to ordered micron sized particles. Using HRSTEM and electron tomography, we could show that an azo linker leads to the formation of a bicontinuous phase, an ordered double diamond (OBDD) structure. The 3D Fourier transform of one of the particles corresponds essentially to a full 3D diffraction pattern, where the systematic absences unique identified the structure as OBDD. Moreover, the tomography analysis revealed a 2x2 surface reconstruction of the (100) facets of the particles, which could also be seen in projection in HRSTEM (Figure 4). In addition, these particules often exhibit twin boundaries and also multiply twinned particles are common.

Figure 4: Low-dose STEM image of a particle imed in [110] orientation revealing a twin boundary and surface recosntruciton of the (100) facets.