In-situ Heating in the TEM

Understanding the relationship between the structure, chemistry and properties is at the core of the materials engineering. The combination of in situ heating in (S)TEM with high-resolution imaging HR(S)TEM, automated crystal orientation mapping (ACOM) and enery filtered TEM (EFTEM) is a powerful approach to directly image the chemical and microstructural evolution as well as crystal orientation changes of all individual grains of a thin film at the atomic and nanoscale. This is the basis to understand the complex processes controlling thermally induced grain growth and phase transformations. However, in order to obtain reliable knowlege about the processes and reactions, the sample preparation has to be carefully optimized to prevent artefacts and thin-film, electron beam and residual gas effects have to be carefully considered for the interpretation.

In this study, sputter deposited nanocrystalline palladium thin films with ~50 nm thickness were used to study the grain growth and crystallographic development in real space. Mapping the grain orientation and their changes in an area with more than one thousand grains in the initial structure with a resolution of 1.5 nm allowed for a statistically meaningful analysis of grain orientation, grain boundary character, grain rotation and grain boundary migration with temperature. Local analysis showed that a reduction in grain boundary curvature and grain boundary area are driving forces for the grain growth, but they are not sufficient to explain grain growth in nanocrystalline metals. Quadruple and higher order line networks appear to locally stabilize the nano grain network. However, once the kinetic barriers are overcome, cascade like grain grwoth is observed.

Our in situ studies showed that the graphitization process is highly dynamic with a number of intermediate reactions leading to the formation of different carbon nanostructures. A two stage growth mechanism was identified where at intermediate temperatures (600-1000 ºC) crystallite growth occurs by consumption of amorphous carbon around the crystallites and at high temperatures (1000- 1200 ºC) growth proceeds by merging of crystallites (Figure 2). This occurs either by attachment of small domains to active edges of other domains and by a catalyst free transformation on the top of another graphitic layer. This catalyst free transformation forms new small graphitic structures with different size shape and mobility (Figure 3). 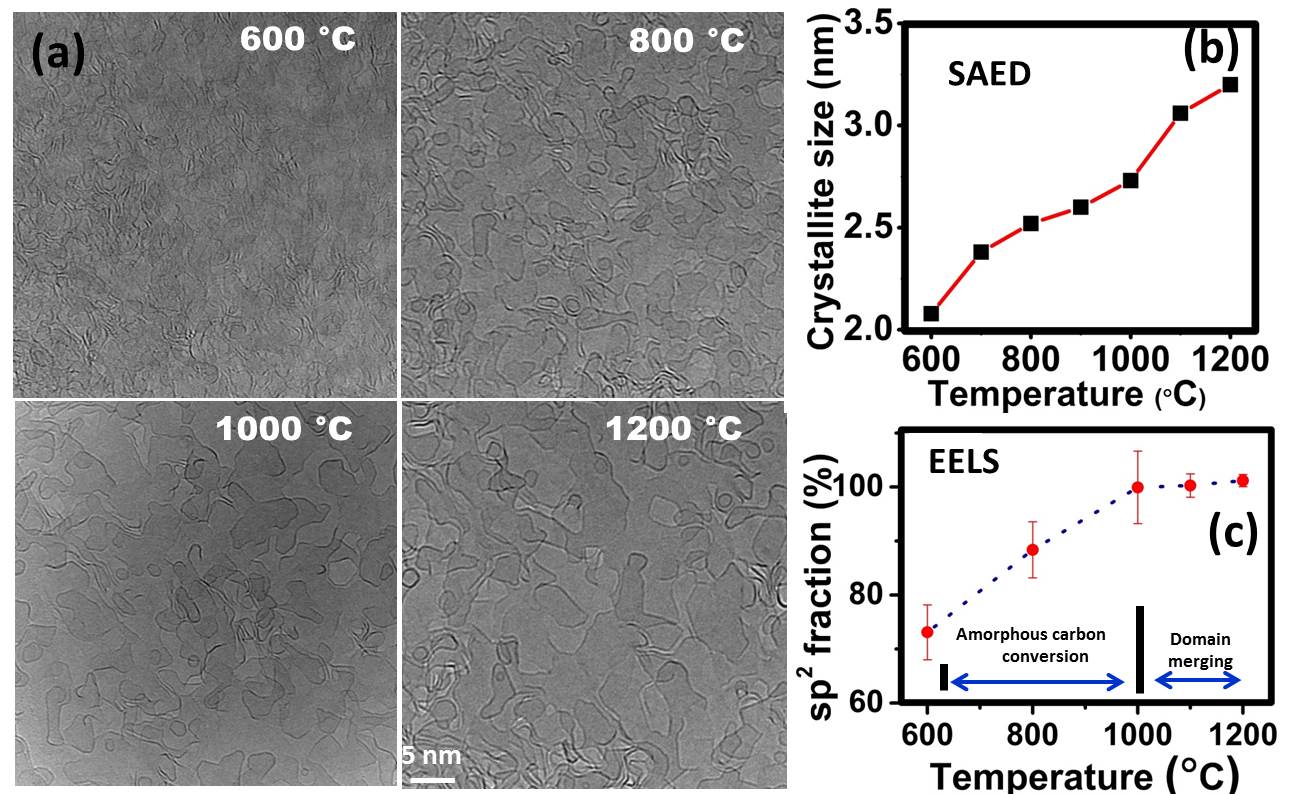 Figure 2: (a) the evolution of domains, (b) crystallite size evolution during hating and (c) the sp2 content at different temperatures. The sp2 content increases from 600 ºC to 1000 ºC and saturates indicating that the amorphous carbon is completely consumed at 1000 ºC and further domain growth is facilitated by merging of domains 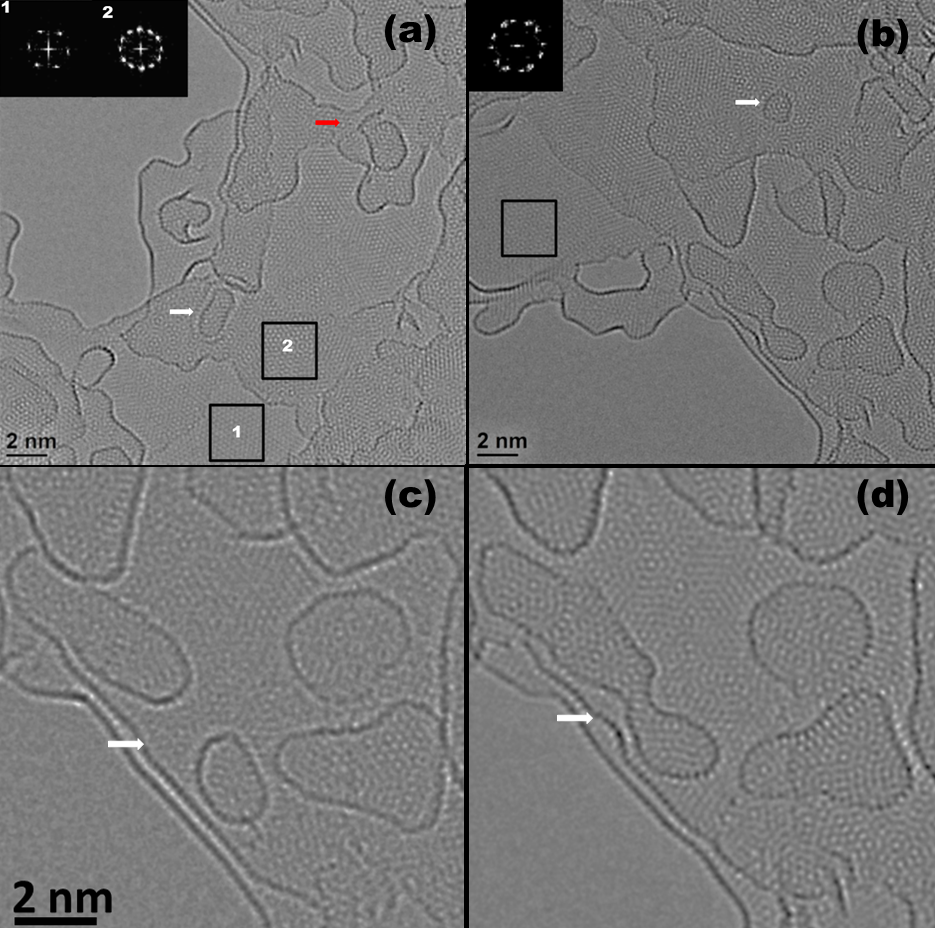 A more detailed investigation of the reactions between graphitic flakes supported by molecular modelling revealed that small flakes on a perfect graphitic substrate are highly mobile, but can be pinned by defects. Only these pinned graphene flakes can actually be imaged in HRTEM. The most common reaction observed between graphene flakes is lateral merging , when they are getting in close proximity. However, in addition, we also observed an Ostwald-like repening of flakes, where the size of small flakes is reduced, whereas larger flakes grow at the same time. However, a direct thermally activited transfer a carbon atoms or small groups of carbon atoms between flakes on a single crystalline graphene substrate is not possible, the activation energy is too high. However, simulations indicate that pinning at defects in the graphene substrate or at edges can significantly lower the activitation barrier and enables a transfer along the defect/edge connecting the flakes. This is also what we see experimentally: the growing and shrinking flakes are typically connected with a characterisitic structrure on the 'receiving' side (Figure 4). 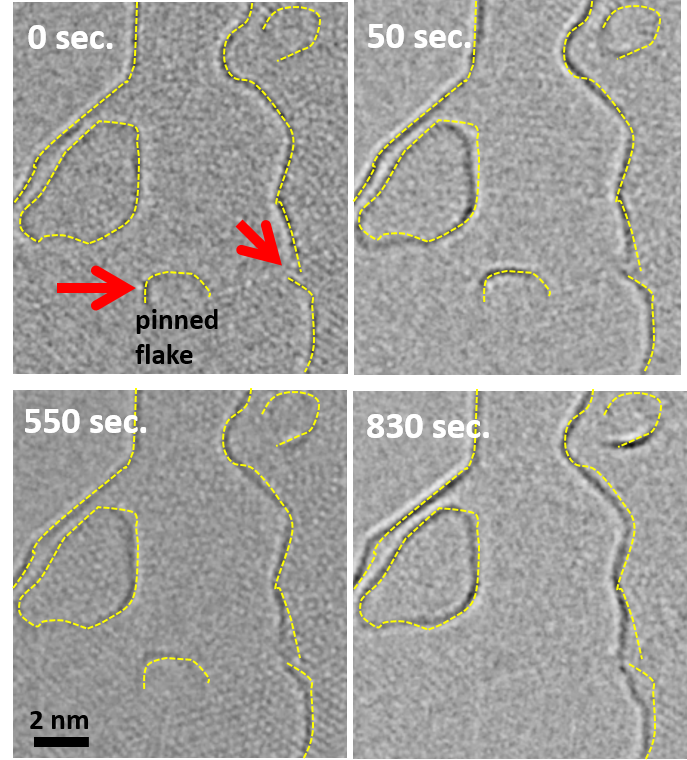 Figure 4: HRTEM imaging of Ostwald-like ripening of a graphitic flakes connected by a defect at 1200 °C.

While order to ensure that these reactions are not dominated by electron beam effects, we have performed careful analysis with extremely reduced dose, only aquiring a single low-dose image every 20-30 min. during a heating series. There, we observed the same basic processes, migration of flakes, shape change, merging and Ostwald-like ripening, suggesting that we observed inherent reactions. Howeverl, a (limited) statistical analysis clear showed a significantly enhanced reaction reate with the electron beam on, suggesting that we are strongly activiting the growth process by the electron beam. Therefore, kinetic studies would not be reliable for this system.

Details have been published at:

While in-situ heating experiments are technically not necessarily particularly challenging (but often very time consuming), their interpretation is typically quite challenging. In addition to 1) electron beam activitaton of the materials changing the reaction kinetics, 2) contamination during sample preparation such as small amounts of Gallium implantation during FIB preparation, 3) thin film effects giving rise to surface diffusion and thermodynamic changes due to the high surface or 4) surface reactions with residual gases at high temperatures are just some of the effects that influence the processes and reactions and in particular their kinects.

While some of these effects can not be avoided (and need to be considered for the analysis), we are minimizing artefacts in most of our work, by growing thin film specimens directly on the in-situ heating grids or if this is not possible, we use tranditional sample preparation to minimize surface damage of the thin films and only use the FIB for the final transfer of the sample to the heating grid, keeping at least 10 micron distance from the actual area of interest to minimize the influence of the preparation on the reactions in the area of interest of the thin film.