Bulk metallic glasses (BMGs) and metallic nano-glasses (MNGs) are structurally disordered alloys whose composition is designed to impede crystallization upon cooling from the liquid state resulting in superior properties, e.g., large elastic limit, high yield strength, excellent corrosion resistance. Metallic glasses with nanometer-sized local structures, so called nano glasses, have recently attracted a lot of attention due to their remarkable interface-related properties, e.g., improved mechanical toughness, magnetic and catalytic properties. It has been demonstrated that the metastable MGs and MNGs have diverse energy states with different configurations depending on the details of the pre- and post-processing, e.g., various cooling rate, annealing, ion implantation, shot-peening, cold rolling, and high-pressure torsion, etc. However, the disorder makes it difficult to study the structure of MGs and MNGs in detail due to their uninterpretable microscopic contrast at atomic resolution.

As an approach to directly investigate the local structure of glasses, we have developed a local diffractrion based approach: spatially resolved pair distribution function (PDF) mapping. Using this approach, we have shown that the Fe25Sc75 nanoglass contains 3 main component phases (Figure 1). They are distributed heterogeneously at the nanoscale (5-10 nm). By comparing the PDFs of the component phases with the PDFs of bulk metallic glasses (BMGs), the 3 component phases are found to be (i) a Sc-rich phase with a similar atomic packing to Fe25Sc75 BMG, (ii) a Fe-rich phase with an atomic packing in a good agreement with Fe90Sc10 BMG, and (iii) an Sc oxide phase. 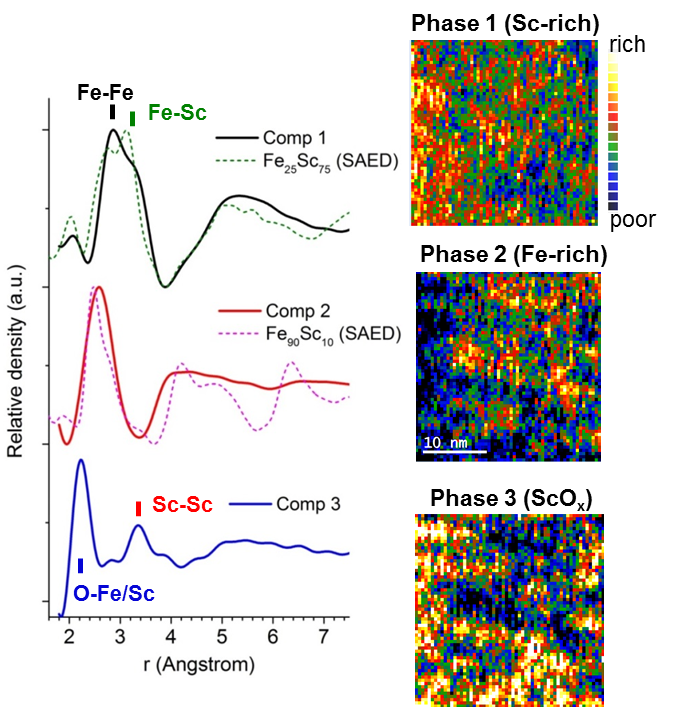 Application of BMG are strongly limited by their poor ductility and lack of work hardening due to localized shear band formation during plastic deformation. However, the difficulties in characterizing the structure of the material in the shear band, which is only a few nanometer wide, embedded in the matrix material, and exhibits very weak contrast with conventional characterization techniques (Figure 2b) limits the understanding of shear band formation and hence the deformation mechanisms of BMGs. Using PDF mapping and independent component analysis we can overcome the challenges to clearly visualize the shear bands and gain insights to their atomic and chemical structures in terms of bonding and coordinations. 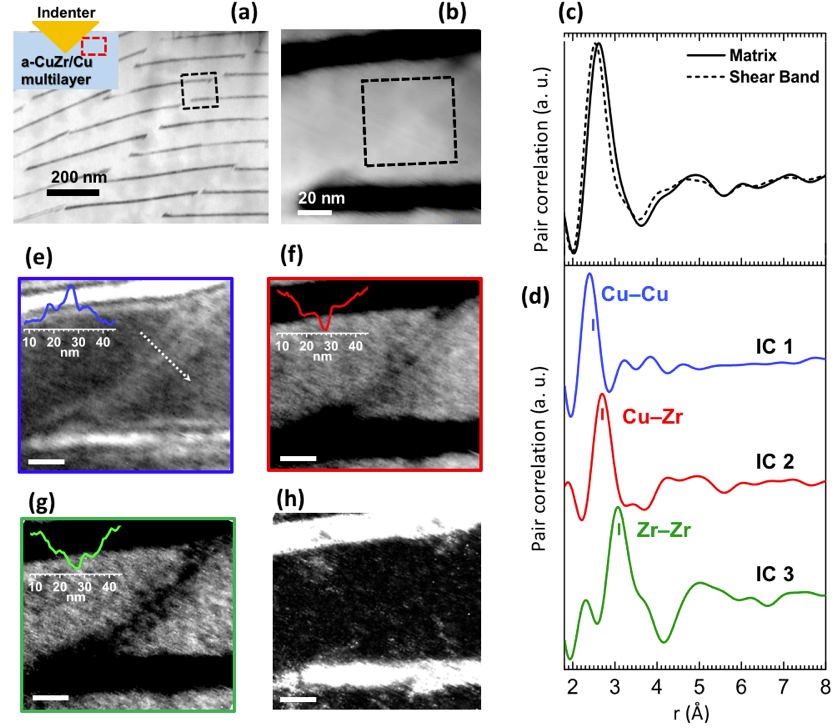 Figure 2. (a) Sketch of the deformation process of the a-CuZr/c-Cu multilayer by Vickers indentation and STEM-HAADF image of the cross-section of the deformed region. (b) Enlarged view from the area highlighted by the black dashed box in (a). (c) PDF of the amorphous matrix (solid) in the a-CuZr layer and the shear band (dashed). (d) ICs of the ICA, where the blue, red and green markers correspond to the Cu–Cu, Cu–Zr and Zr–Zr bond length measured by the X-ray diffraction. Spatial distribution of (e) IC1, (f) IC2 and (g) IC3. The insets are line profiles along the dashed white arrow in (e). (h) Residual error of the ICA, which is mainly concentrated on the c-Cu layer. The length of the white scale bars in (e)-(h) are 20 nm.

Details and further work are published at