In close collaboration with the groups of Prof. Jan-Dierk Grunwaldt at KIT and Prof. Laura Prati at the University of Milano, we are working on the structural characterization of a variety of heterogeneous catalysts. TEM plays an important role in determining of the structures of supported metal nanoparticles, the configuration of metal-support interface and local geometric and electronic structures at atomic level.

1. Tailoring the structures of carbon supported Au and Pd nanocatalysts

In collaboration with Prof. Laura Prati’s group and Dr. Alberto Villa at the University of Milano, we investigate the structure of metal (gold, platinum and bimetallic) nanoparticles prepared by different impregnation and colloidal methods on functionalized carbon supports. In particular, we focus on the effect of different preparation methods and differences in the support on the distribution of the metallic nanoparticle, e.g. inside or outside CNFs or on the internal of external surface of ordered and disordered mesoporous carbons. The aim is to correlate the structural differences with the reactivity and selectivity differences of the catalysts.

Electron tomography is only technique available to directly image the structure of the support and the metal nanoparticles with (sub)nanometer resolution in 3D and we have developed the analysis further to obtain a quantative structural description. As one example, our investigation revealed that in Au/CNFs prepared by impregnation, the metal particles were found both inside and outside the CNFs, while for Au(PVA)/CNFs, particles were found exclusively on the outer surface of the CNFs. The cross-sectional slice intersecting a few particles on a representative CNFs of each catalyst are shown in Figure 1.1. For the oxidation of glycerol, the distinct difference in selectivity towards tartronic acid at the expense of glyceric acid can be attributed to the prolonged reactant-active site contact time, promoting the consecutive oxidation of glyceric to tartronic acid in case of Au inside CNFs observed for the impregnated catalyst.

Fig. 1.1 Cross sectional slices derived from electron tomography showing a) preformed Au(PVA) particles exclusively situated on the outer surface of N-CNF and b) Au particles prepared by impregnation situated on both inner- and outer-surfaces of N-CNF. 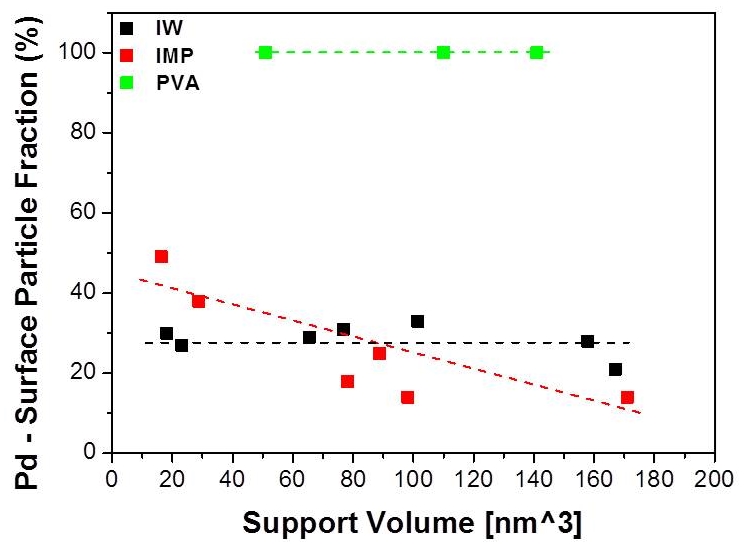 Fig. 1.3. (a) A representative 3D visualization of the metal particles ond the internal and external support surface and (b) a quantitative anaylsis of the fraction of Pd nanoparticles on the external surface of the support depending on the support volume for the three catalysts.

We are currently trying to correlate the observed structural differences with the differences in reactivity and selectivity during oxidation reactions of these catalysts also taking into account that the particle distribution is significantly changing in PdIMP/CMK-3 during the catalyic reaction, whereas PdIW/CMK-3 and PdPVA/CMK-3 are stable based on an analysis of the catalysts after 3 reaction cycl

This work is partially funded by the China Scholarship Council through the PhD scholarship of Wu Wang.

2. Ru modified Au catalysts for the selective oxidation of alcohols

In collaboration with Prof. Laura Prati’s group at the University of Milano we investigated the effect of the preparation method on the activity and selectivity of Au-Ru bimetallic systems supported on activated carbon in the liquid phase oxidation of aliphatic alcohols. Depositing Ru nanoparticles on preformed Au/AC using a two-step procedure for bimetallic catalysts leads to a good metal dispersion on the support. STEM-EDX mapping (Fig. 2.1) shows that well dispersed Ru is mainly located on the surface of Au particles. In contrast, Au immobilized on Ru/AC results in big Au particles and segregated small Ru particles. Using Au as nucleation seeds can effectively stabilize Ru in glycerol oxidation. 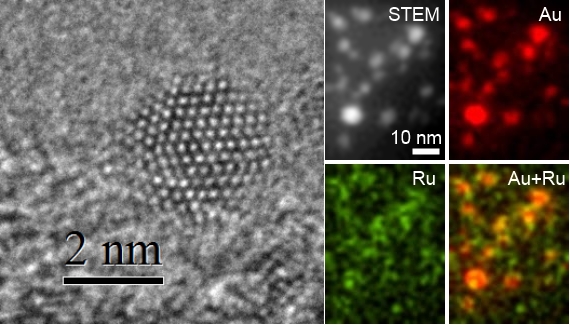 3. TEM in combination with X-ray ptychography and in situ spectroscopy

In collaboration with the groups of Prof. Jan-Dierk Grunwaldt at KIT, we are aiming at linking different spectroscopic and microscopic approaches for powder catalysts, using a portable inert gas protected sample transfer unit (for sample examination by XPS, IR, XANES/EXAFS, XES) and for transfer to the electron and x-ray microscopes, using a novel sample holder transfer apparatus.